Bears on the bubble for NCAA tournament 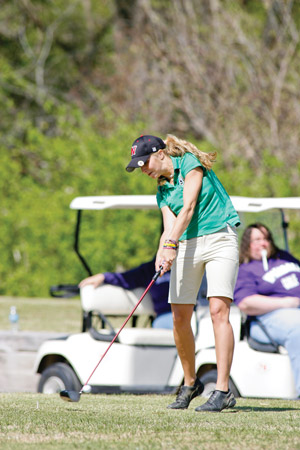 As far as women’s golf programs go, No. 6 George Fox University and No. 14 Washington University in St. Louis have a tremendous amount in common. And yet, one extra George Fox stroke at their conference championship this past weekend may be the difference between Wash. U. making its first trip to the national championship in its brief history or having to wait until next year.

With the regular golf season virtually over, the Bears are one of probably 11 teams competing for eight available spots. I figure, however, that three of those spots are just about locked up.

Methodist University, the 12-time defending champion, is almost assured a bid. I see another slot going to No. 4 Amherst College which, like Methodist, plays in a conference that does not have an automatic qualifier. I also think George Fox will get another even though they were upset by unranked Whitworth University in their conference championship by that single stroke.

Assume that, No. 9 Williams College, No. 10 Olivet College, No. 11 Southwestern College, No. 12 Allegheny College, No. 13 St. Lawrence University, Wash. U. and No. 15 Centre College will be the teams left jockeying for the remaining five tickets to the national championship tournament in Howey-in-the-Hills, Fla.

Comparing Wash. U. to those other teams is tough. I personally believe that Williams and Centre are two of the most underrated teams in Division III, but I also think St. Lawrence is not as impressive as their ranking suggests. So just focusing on the Bears, I’ve been going back and forth between whether I think they should or shouldn’t qualify. That captures the essence of their, and the selection committee’s, dilemma.

For Wash. U., it has been a tale of two teams. On one hand, there was the fall team that took the Division III golf world by storm after a win over a stacked field at the IWU Fall Classic. On the other, there is the spring team that struggled and posted a team average of more than 18 strokes worse than their fall score. The fall team definitely deserved it; it’s questionable whether the spring team does. But the decision is based on some broad criteria—that I think benefits the Bears—and the team’s full body of work.

I think they deserve a shot, though. If I had to judge which team was “the fluke,” I’d say it was the spring season.

It’s important to note that the good scores were still there in the spring; it was just the consistency that was lacking. In just about every round this spring, there were one or two impressive numbers, but the team scores got jacked up by the back nine. That wasn’t the case this fall though, showing that the back nine can be strong.

I also think this team is very solid on the individual level. I’d call freshman Hannah Buck one of the top 10 freshmen in Division III and fellow freshman Melanie Walsh isn’t too far behind. Likewise, sophomore Katie Homa has steadily, albeit quietly, improved her scores, and I get the sense that soon she could be a major contributor.

Finally, I think they’ve turned the corner, and it’s better late than never. The Bears showed signs of improvement the past couple of tournaments, and I think they’d end up being a worthy competitor down in Florida.

Objectivity aside, I want this team to make it down to nationals and you should too. It’s the last chance for a group of seniors who have shown unwavering dedication to really take in the fruit of their work. Senior co-captain Kris Zeschin said earlier in the spring that she and her fellow seniors want to go to nationals “about as bad as you can want it.” Unfortunately that’s not part of the criteria, but they still have hope.