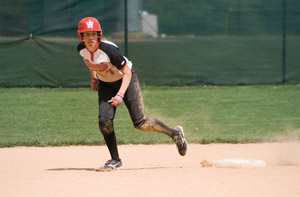 Senior Megan Fieser, the current leader on the Bears’ all-time stolen base list, looks to score off a base hit from second base.

Junior Claire Voris and sophomore Olivia Cook each picked up two complete-game wins as the No. 12 Washington University softball team swept two doubleheaders over the weekend.

Harris Stowe’s Jenna Walter held the Bears to a run in the first three innings of the first game, but their bats came alive with three runs in the fourth inning. Trailing 2-1 to start that inning, the Bears took a 4-2 lead to seal the win for Voris.

Senior Megan Fieser stole two bases in the game, moving her into sole possession of first place on the Bears’ all-time stolen base list. While she is excited to achieve major milestones, she noted that it helps the team in the process.

“I think [stealing bases] helps me get into scoring position, and just having that goal to reach toward helps me help the team,” Fieser said.

The Bears sought to get on the board earlier in the second game, and they did just that. Senior Caitlyn Hoffman’s two-run homer to right field set off the Bears’ five-run second inning.

“I’ve been hitting the ball not that great lately, so I was just trying to hit the ball hard someplace and get a good feeling, so it worked well,” Hoffman said.

The outburst was more than enough for Cook, as she almost threw a shutout. An error in the sixth inning allowed Harris Stowe’s only run to score. “Sometimes stuff like that just happens. More importantly I’m glad that we got the win and that we hit great,” Cook said. “I think we’re where we need to be this season, and the shutout doesn’t mean as much as the win.”

On Sunday, the Bears forced the mercy rule in both victories against Fontbonne University, collecting 27 hits en route to five-inning finals of 14-2 and 11-1. Senior Ashton Hitchcock led the barrage with a grand slam in the first game on Sunday.

“I wasn’t really even thinking about trying to hit a home run or how many people were on base,” Hitchcock said. “At that point it was fun more than anything because everyone was hitting.”

Though Voris and Cook both delivered strong outings again, the Bears’ offense was too much for Fontbonne, putting up 10-run innings in each game.

In the first game, the Bears scored 10 runs in the fourth inning to extend their 4-2 lead to 14-2, giving Voris a hefty cushion. Sophomore Corissa Santos doubled home the first run of the inning, and Voris followed with a two-run single. Freshman Ashley Janssen and Fieser each added an RBI.

Hitchcock came to the plate with the bases loaded and put the exclamation point on the inning with her grand slam. The home run for Hitchcock was the 15th of her career, which puts her in fourth place all-time.

In the second game, Cook and Fontbonne’s Kourtney Von Behren were locked in a pitcher’s duel, allowing one run each in the first four innings.

In the top of the fifth, though, the Bears exploded with another 10-run inning, capitalizing on two errors by Fontbonne. Six different Bears drove in runs in the inning, and eight of the 10 runs the Bears scored were unearned.

Fieser highlighted the game with a 3-for-4 performance, including a two-run triple. She went 6 for 8 in the doubleheader and extended her hitting streak to 17 games.

The four wins and the solid pitching and hitting came despite the Bears’ having taken a week off from games. The Red and Green said the team worked hard on fundamentals last week. “We had a good week of practice and we got to adjust some things and solidify positions, so I think we’re on a good roll right now,” head coach Leticia Pineda-Boutté said after Saturday’s games.

The Bears (28-6) continue their eight-game home stand against Westminster College at 4 p.m. Wednesday.