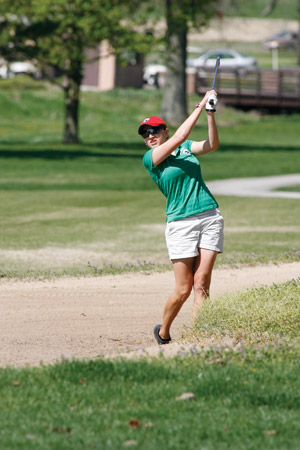 Kris Zeschin follows through after hitting the ball on Friday, April 9 at the McKendree Spring Invitational at Cardinal Creek Golf Club.

No. 13 Washington University took fifth place out of 17 teams at the Illinois Wesleyan University Spring Fling at the Ironwood Golf Course in Normal, Ill., this past weekend. Now the Bears will have to keep their fingers crossed in hopes of the team making its first-ever trip to the NCAA championship.

Wash. U. battled windy conditions on Saturday to turn in a 339. The Bears were in fifth place halfway through the tournament, but could not move up the leaderboard even though the team shaved off 10 strokes on Sunday for a 329. Wash. U. finished just eight strokes behind No. 5 Saint Mary’s College (335-325, 660), which took fourth.

“It would have been awesome to beat [DePauw, Illinois Wesleyan, or Saint Mary’s], but they’re good teams and they put up good scores,” senior co-captain Kris Zeschin said. “We didn’t do bad at all, so there’s not much you can do…we stuck with it well though and it was a good tournament.”

The team’s 668 was its best 36-hole total of the spring and came on the backs of several strong individual efforts. Sophomore Katie Homa turned in a second round 80 for her career best on 18 holes and also matched the best 36-hole score of her career with a 165.

“I feel like I really didn’t play that much better, but I played a lot smarter,” Homa said. She added that she struggled to hit fairways at times and was forced to scramble, but it was her course management in those situations that keyed her strong performance.

“I definitely think I’ve turned a corner,” Homa added. “I’ve seen that good things happen when you play smart and maybe settle for the bogey so I think that will definitely help my game in the future. I’ll probably try to play safer rather than try for the difficult shots.”

She tied freshman Hannah Buck for 22nd. Buck fired the second highest score of her career during the first round with an 88, but rebounded with a second round score of 77—her third-best score.

The Bears caught an unfortunate break when junior co-captain Kathleen Pettinato’s first-round score was disqualified for playing from the wrong tee. Her playing partners were disqualified as well. The issue reportedly stemmed from one of the competitors accidentally referring the group to the wrong rule sheet. Pettinato shot an 89 in the second round.

“It was a good learning experience. It could’ve happened to anyone on the team,” Pettinato said.

What this outcome does for the Bears’ chances of reaching nationals is unclear. Ultimately, the question is whether the selection committee will pay attention to the Bears’ fall, where the team performed better, or the spring, where they admittedly struggled according to several golfers.

“We hope that we have a shot at the postseason, but I think a lot of us are frustrated with how we played. We just wish we had more time and more tournaments left in the season,” Pettinato said. “Obviously, we had all started playing a lot better as the season went on.”

The NCAA will release its field for the national championship at the Mission Inn Resort in Howey-in-the-Hills, Fla., on May 3.

With additional reporting by Alex Dropkin.