The St. Louis Cardinals: What to watch for this season 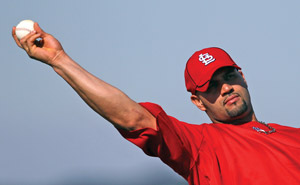 On Monday, April 5, the St. Louis Cardinals begin the regular season, hosting the Cincinnati Reds at Busch Stadium. After an NL Central division title and a first round exit in last year’s playoffs, the Cardinals are the clear favorites to take the division again. Here are some of the key themes and players who you should be watching out for:

The meat of the order
Coming off last year’s MVP season with 47 home runs, 135 RBIs and a .327 average, hometown hero Albert Pujols is primed for another big year. At age 30, Pujols is still enjoying his best years, and the face of the franchise is something to be excited about.

For the first time in his career, Pujols has a big name star batting behind him in the lineup. Left fielder Matt Holliday is entering his first full season in St. Louis, and hitting behind Pujols means he will enjoy more RBI situations than he is used to. Holliday is coming off of a season with 24-homerun, 109-RBI and a .313-batting average, and although he has missed most of the preseason with a muscle strain, he has been dominant recently. Holliday had never played for a big-market team before last season (having played with the Colorado Rockies and the Oakland Athletics), and he has thrived on St. Louis’s big stage.

Top of the pitching staff
If they remain healthy, the Cardinals have one of the most lethal one-two punches in the MLB atop the rotation. Chris Carpenter takes the hill for opening day on Monday. Carpenter is coming off a 17-4 season with a National League-leading (and second in the major leagues) earned run average of 2.24, and he has shown no signs of slowing down this season.

Adam Wainwright, who led the Major Leagues with 19 wins last season and was fourth in the national league with a 2.63 earned run average, is one of the best pitchers in the league not pitching on opening day. Between Wainwright and Carpenter, the Cardinals have a dominant starter entering at least 40 percent of games.

Supporting players
These are the big name players, but any championship team knows the supporting cast is equally important to success. Right fielder Ryan Ludwick, hitting behind Pujols and Holliday in the lineup, will be largely relied on for key RBIs. Ryan Franklin, coming off a 38-save season with a 1.92 ERA, has quietly emerged as one of the league’s top closers. And, earlier this week, St. Louis-native David Freese was awarded the third basemen job and will now be counted on for production.

There are never any certainties entering a baseball season, but the Cardinals have the personnel to capture their second consecutive NL Central title and make a run in the playoffs.