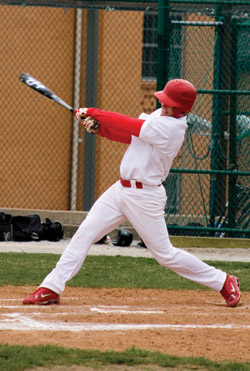 Junior Travis May swings in Wednesday’s 9-0 victory versus Benedectine University. The Bears swept Millikin University in a doubleheader on Wednesday.

By Monday, pending clear weather, the Washington University baseball team will have played 10 games in only six days.

Senior Nick Vom Brack led the way to victory in two of those 10 games, against Millikin University on Wednesday, with a pair of two-run home runs.

“Situationally, I haven’t been hitting as well as I would’ve liked to,” Vom Brack said. “For the most part, it hasn’t been one of my stronger points on the year. [With the hits], it’s kind of finding my groove again, getting back into rhythm, and doing what I know how to do. It was definitely big…and I’m just happy that I could come through.”

Down by three runs in the fifth inning of the second game and hitless, the Bears needed a spark.

“[The Millikin pitcher] had been cruising up to that point,” Vom Brack said. “He had shown signs an inning earlier that he was getting wild. Finally, by getting some runners on base…he started leaving some pitches in the zone that we really capitalized on.”

After back-to-back walks, a double play and an RBI single, Vom Brack stepped up to the plate.

“I didn’t even really get the greatest pitch [to hit],” he said. “I just tried to put a good swing on it.”

The Red and Green would push across two more runs in the inning, setting up a 5-4 victory.

In the first game of the doubleheader, Vom Brack’s blast added two crucial runs in the sixth inning, pushing a one-run lead to three. The Bears gave up one run in the seventh to close the game 6-4.

The previous day’s games at Illinois College were less successful, as the Bears picked up a split in the doubleheader. Wash. U. powered past the Blueboys 16-8 in the first game, behind six RBIs from junior Travis May, but lost 8-7 in the second game. Pitcher junior Eric Myjak gave up two runs in the bottom of the seventh for the walk-off loss.

“[The loss] was really tough because…we were down almost the whole game,” pitcher Adam Merzel, a junior said. “We came back in the seventh inning and we went ahead. Then we just messed up a couple of bunt plays and they took advantage of it. That’s baseball. It would’ve been great to win that game, but…we’re just going to do exactly what we did last year—keep on rolling.”

The Bears play six games at home this weekend, including a doubleheader Friday against the University of Wisconsin-Platteville. The first pitch is scheduled for 12:30 p.m.

“It’s definitely a very busy time,” Vom Brack said. “None of us have ever played this many games in such a short period of time. It’s a lot of stress on the team…but I think it’s something that we can definitely get through.”