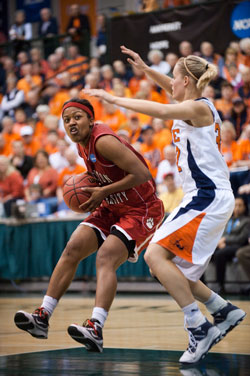 Graduate student Jaimie McFarlin scored 14 points and recorded 15 rebounds to help lead Wash. U. to a national title. With the rebounds, McFarlin eclipsed 1,000 for her career. She leaves Wash. U. with 1,012 rebounds and the record for most games played.

BLOOMINGTON, Ill. — After a third appearance in the championship game in four years, Jaimie McFarlin and the veteran Washington University women’s basketball team would not be denied.

“Even when I was shooting those last free throws, I was thinking [that] it’s still not over,” McFarlin said. “I just couldn’t believe it until the confetti started falling, and it was real confetti, not the confetti in my dreams. To get to the goals that you set, it feels so good.”

“It was our want for it that got us here,” senior Stacey Niese said.

The No. 6 Bears rallied behind a tenacious defense to control the entire game against No. 4 Hope College, taking the game and the 2010 NCAA Division III national championship 65-59. The title is the fifth in program history and first since 2001.

“Once you are fortunate enough to experience one and then it’s been about 10 years, you realize how hard, how special, how much you must have a little left, how fortunate you are to have that magical chemistry, and you try so hard…Once you separate yourself, you realize how special this is,” head coach Nancy Fahey said.

Junior Alex Hoover scored a career-high 18 points, including making 10 of 11 free-throw attempts. Whenever Wash. U. needed a basket, Hoover answered. She also iced the game with free throws down the stretch.

“She made a ton of clutch plays,” Fahey said. “I know she led us in scoring, but I think you need to pick up where those points actually came. She’s very confident and runs the team, so when she was on the free-throw line, I’ll take that any day.” 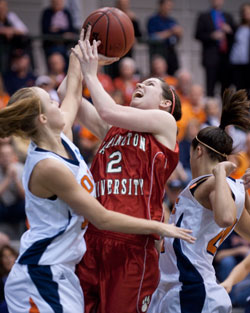 Junior Alex Hoover scored a career-high 18 points and made 10-11 free throws in the win against Hope College.

After being shut out 10-0 by Amherst to start the semifinal game, McFarlin made sure Wash. U. scored on its first possession with a quick jumper. In her final game for the Bears, McFarlin scored 15 points and racked up 15 rebounds, leaving her with 1,012 career rebounds at Wash. U. She was also awarded tournament MVP.

“I think we just came out knowing that you have to do four minutes at a time. If you win the first four minutes, then you go to the next four minutes,” McFarlin said. “Those media timeouts actually helped to make the game into smaller pieces, so I think we did that really well.”

No team led by more than six points in the first half, but Wash. U. rallied behind layups by junior Hannah Cusworth and Hoover to take a 24-20 lead into halftime.

Hope took the offensive in the second half, briefly taking the lead on a basket by junior Carrie Snikkers. But baskets by senior Zoë Unruh, junior Kathryn Berger and Hoover staked Wash. U. to a 39-33 lead that would hold for the remainder of the contest. Hope cut the lead to four with less than a minute to go on a three-pointer by senior Jenny Cowen, but Hoover and McFarlin iced the game from the free-throw line, sending the Wash. U. student section into a round of “We Are the Champions” and bringing Wash. U. the national title.

Despite some rocky possessions, the Bears rallied around a tough defense to control the tempo and remain ahead for most of the game. The Red and Green held the Flying Dutch to just 19.4 percent shooting in the first half and only allowed Hope to shoot just 31.3 percent for the entire game.

“With the turnaround that we talked about, there’s not much that you can do in preparation except what we’ve done in the past, and that was our poise defensively, and they did it,” Fahey said. “They just did a lot of things right at the right time, and I’m really proud of them.”

“I don’t think that we played a poor game,” said Brian Morehouse, head coach of Hope. “I just think that they played a little bit better than we did. They really made big free throws going down the stretch.”

Every single Hope player attended the news conference to show team unity. While the team was upset about losing, a final motivational speech from Greene brought the entire press room to tears and showed the immense pride each player had for finishing second.

“I’m feeling disappointed but very proud. Not one person quit today, even when we knew it was out of reach. Not one of us quit, and I told them earlier in the locker room how proud I was of them not quitting,” Greene said. “As bad as I wanted to win, I wanted it so much more with these 23 people behind me. The national championship would have been great, but to go away with 23 people next to me and behind me that I love and that I bond with is so much more than a trophy, a ring, a banner or any of that stuff.”

The senior class at Wash. U. leaves with an overall record of 99-21, a national title, and two second-place finishes.

“To end your career on such a high note, I can’t ask for more,” senior Janice Evans said.

Unruh said, “It was a perfect way to end. That’s how we built our season.”