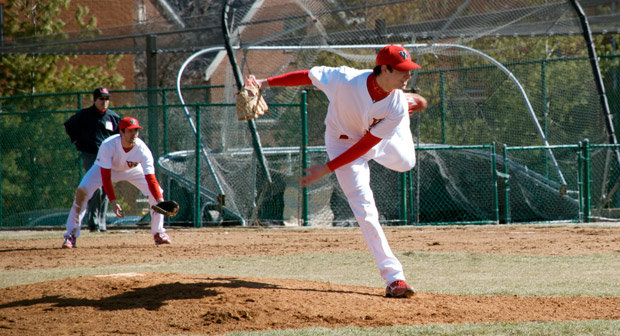 The Washington University baseball season has only just begun, and already there have been plenty of ups and downs.

Junior Miguel Davis’ two-run single in the bottom of the sixth inning on Sunday against Fontbonne University capped a five-run rally that was enough to win the game.

“Really, at that point, we were just trying to get a couple of runs on the board—at least cut down the lead,” Davis said. “When I came up, really all I had to do was put the ball somewhere in the outfield, and it just so happened that I got a good pitch to hit.”

The Bears also capitalized on two walks and an error in the key inning.

Junior David Lieberman started the game for the Bears, but struggled through five innings, giving up five earned runs and four walks. A three-run third inning for the Griffins broke a 1-1 tie.

Junior H.T. Flanagan took the mound in relief of Lieberman during the top of the sixth inning, shortly before the Bears’ rally. He finished the game with four scoreless innings.

The victory pushed the Bears to a 2-1 record for the weekend, including a split doubleheader against Coe College on Saturday.

“Saturday obviously wasn’t how we wanted to come out offensively, so I’d say definitely on Sunday, everyone was hoping to come to the plate more aggressive and put up some more runs,” Davis said.

The Bears suffered an 8-0 loss in the second game, but managed a close 3-1 win in the first.

“It was just really good to get back out there, [to] start throwing strikes early,” Rogoff said. “For me, after having a pretty tough season last year, it was just a really good confidence boost to help my team win.”

The Bears got on the board quickly, scoring two runs in the first inning. After loading the bases on two walks and an error, juniors Joe Noon and Matt Skinner forced back-to-back RBI walks.

“Baseball is just a crazy game like that,” Davis said. “Basically, if you make an error, something is going to end up building on top of that. For us, especially early in the season, you have to take advantage of little changes in momentum like that.”

Coe responded to the loss with an eight-run performance in the second leg of the doubleheader.

The Kohawks broke a fifth-inning scoreless tie with an RBI groundout, but subsequently scored five more runs in the next inning off freshman reliever Max Gordon.

“It’s kind of a tough period, because we haven’t really been outside at all…so it’s a chance for all of us to get some repetition in and for [Coach Lessmann] to see what lineups are going to work,” Rogoff said. “It’s a little like the preseason, although these games count, so we need to figure it out fast.”

Wash. U. recorded seven hits, but could not score.

As a “Pool B” team, not able to receive an automatic NCAA tournament bid, head coach Ric Lessmann stressed the importance of the Bears winning every game.

“You can’t fool around at this stage in the game…We have to play every game like it’s a tournament game,” he said. “There’s no getting around it. There’s nothing easy about anything we do; there is just one tough game after another.”

Washington University continues with another doubleheader Wednesday against Westminster College. The first pitch is at 1 p.m. at Kelly Field.

The Bears will also compete at the UAA championships in Sanford, Fla., during spring break.