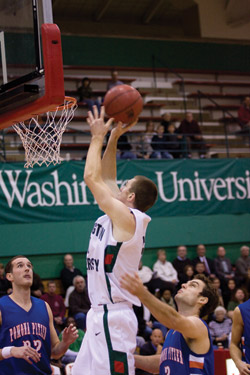 With the University Athletic Association championship in hand and only one week until the start of the NCAA tournament, the Washington University men’s basketball team had only one more chance for tune-ups.

This last opportunity came with a narrow 64-60 victory at the University of Chicago on Saturday.

“From now on, it’s one and done,” head coach Mark Edwards said. “So you’ve got to win them or you’re out.”

Senior co-captain Aaron Thompson, who put up a game-high 23 points, facilitated the win in the final game of the regular season. After Saturday’s performance, Thompson surpassed Tyler Nading (’05-’09, 1,552 points) for third place on Washington University’s all-time scoring list with 1,558 points. Thompson shot 7 for 11 from the field, and 4 for 6 from three-point range in the game.

“The thing that has impressed me the most about Aaron this year is the fact that he has had a target on his back,” Edwards said. “They have different strategies for double teaming, for zoning, for trying to be physical with him, for not letting him get the ball. But he has kept his poise, he’s taking good shots, and he hasn’t changed the type of shots that he looks for.”

Despite shooting only 25 percent from the field in the first half, the Bears lead 20-19 at halftime.

“I told them, ‘The good news is that we are holding Chicago to 28 percent shooting, but the bad news is that we are shooting 25 percent,’” Edwards said. “I was pretty confident that our shooting percentage would go up in the second half. We were taking good shots, but we weren’t finishing some of the open shots we were getting.”

The team responded to Edwards’ talk, and over a 3:13 period in the middle of the second half, the Bears went on a 13-0 run. During this stretch, four points by Thompson, two three-pointers by junior Caleb Knepper and one by senior Ross Kelley helped solidify a 12-point lead that the Bears never let go. Knepper finished the game with 10 points.

“[The scoring run] happened when a bunch of guys that came in off the bench were in,” said graduate student Sean Wallis, a co-captain. “They did a great job picking up the energy. They have been playing so well in practice that it was great for that to carry over into a game. I think that’s was what turned around the game.”

Wallis, who finished the game with seven points, three assists and three rebounds, believes that the Bears have the knowledge and experience as a team to continue their postseason success this year.

“We are a confident group, but at the same time, we understand what it takes,” Wallis said. “It’s not a cockiness by any means, but we understand that we’ve got to go out and play hard, and hopefully the ball bounces the right way for us and we can make another run at it.”

“How could you not be confident playing with guys that you’ve played with all these games for the last four years?” Edwards asked.

Now that the Bears have concluded the regular season, they will await their postseason schedule, which will be released at 9 a.m. on Monday. The team will find out where they head in the Danforth University Center Fun Room, and Bon Appétit will provide a free continental breakfast to fans.