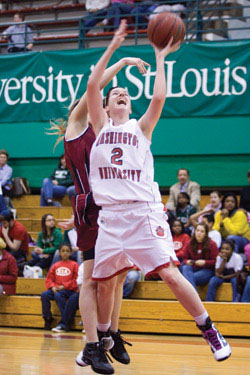 This weekend was for the Washington University women’s basketball team’s seniors. Although Stacey Niese, Zoë Unruh, Janice Evans and graduate student Jaimie McFarlin were the ones who were honored before Friday night’s game, there were plenty of points to go around come gametime.

Juniors Kathryn Berger and Alex Hoover led the way in a 71-54 win against Case Western Reserve University on Friday, and it was Evans and Unruh who brought the points on Sunday as the Bears closed out their home schedule for the year with an 89-61 win over Carnegie Mellon University.

“It was a big weekend for us,” Unruh said. “It’s always kind of weird when it’s your last two guaranteed home games. It’s emotional, but it was a lot of fun.”

There was no shortage of production for the Bears on offense this weekend, with Sunday’s game being the highlight. Shot after shot fell for the Bears, who put up 52 points in the first half while shooting 60 percent from the field.

“I think definitely today we picked up the pace a lot,” Unruh said on Sunday. “We’re shooting well. We’ve definitely got a bit more confidence in our shooting.”

Friday’s contest against Case started as a close one, as the teams traded baskets and Case’s press troubled the Bears on the offensive end. An eight-point run from Berger put them in motion late in the first half, and they took a 40-28 lead into the half.

Berger’s efforts were complemented by Hoover’s, who scored 10 of her 17 points in the first half. The Bears jumped out to a lead as big as 26 points in the second half and cruised through the rest of the game.

But the big story on Friday was the pregame ceremony that honored the seniors and their achievements. Niese, Unruh and Evans have combined for a 92-21 record and a 47-8 record in University Athletic Association play in their time here.

“You look at their contributions both on and off the court, and it’s incredible,” head coach Nancy Fahey said. “Two Final Fours, four trips to the NCAA tournament and, more importantly, the leadership and the quality of people that they are. They should be proud of their legacy here.”

The seniors said they all were proud of the season and their accomplishments.

“We spend every single day in the gym shooting,” Niese said. “Basically we’re a family. It’s just a way of life now.”

With the wins, the Bears stand at 22-2 and have clinched at least a share of the UAA title for the 12th time in the last 13 seasons. They can clinch an outright title, and an automatic bid to the NCAA tournament, with a win at Chicago on Saturday.

“Our conference is one of the toughest in the nation, and if you win that, you put yourself in place with some of the best in the nation,” McFarlin said. “So it’s big. It’s great to be the champ against all of these schools with great basketball programs.”