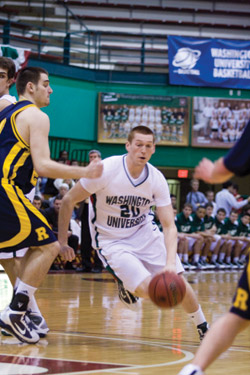 Revenge is a dish best served cold. But in a rematch against No. 21 Brandeis University, the No. 3 Washington University men’s basketball team was far from cold. Shooting a combined 56.7 percent from the field during this past weekend, the Bears grabbed two more conference wins.

“Offensively, we were in a slump for a little while,” sophomore Dylan Richter said. “I guess we all collectively decided to get that out of the way now, so we’ll be ready for tournament time. We knew it was going to come to us, so it was just a matter of time before everything started clicking again, and the past two weekends it has.”

Friday’s matchup at Brandeis gave the Red and Green a chance to avenge a Jan. 15 home loss. Graduate student Sean Wallis led the team with a career-high 29 points, while senior Aaron Thompson added 25.

“They’re a very good team, there’s no doubt about that, and we had to play a great game…in order to beat them,” Wallis said. “Scoring a career high was icing on the cake, but I was just happy to get out of there with a win.”

The Judges maintained a small lead early in the first half, before Wallis’ three-pointer tied the score at 16 with 12:33 to go. The Bears would lead for the rest of the game.

Thompson’s three-pointer gave the Bears a 12-point lead with little more than five minutes left in the first half. The lead would remain into halftime, with the Bears ahead 44-32 at halftime. In the first half alone, Wash. U. shot 66.7 percent from the field (18 of 27).

“A lot of [the success] has to do with good shot selection,” head coach Mark Edwards said. “Our kids have been executing the offense well, and we’ve been ending up getting the shots we’re very comfortable taking.”

While the shots continued to rain in the second half for the away team, Brandeis picked up on the offensive end as well, cutting the lead down to just four points with 12:25 left in the game. More long-range shooting, however, pushed the Bears back out to a 72-57 lead.

“Aaron Thompson and Sean Wallis have been playing outstandingly for the past few months, so teams really key in on them, which gives everyone else the opportunity to roam around a little bit more and get a little bit more open,” Richter said. Richter had 12 points in the game.

The Judges mustered another run late in the half, but the lead was too much to overcome. The Red and Green left Waltham, Mass., with a 92-82 win.

“You never want to lose, especially on your home court, so when they beat us there, we knew we had to turn around and beat them back for that,” Richter said.

The Bears never trailed against the Violets, tying only twice in the game: 2-2 with just a minute into the game, and 11-11 with 11:37 to go in the first half.

A five-point halftime lead exploded in the final 20 minutes of play. Three straight three-pointers from Thompson gave the Red and Green a 38-24 advantage in less than two minutes.

With this win, the Bears secured at least a tie for the conference championship. A win over Case Western Reserve University at home this Friday would clinch the Bears’ second straight University Athletic Association title.

“First of all, to be able to go through the UAA and have six of our seven road games completed and having won them all, I think that’s really big,” Edwards said. “You’ve got to win the UAA to be a legitimate contender for the national championship, or to get in the NCAA tournament, so that’s our goal.”

With the weekend victories, the Bears regained the No. 1 ranking in the D3hoops.com Top 25 Poll.