The ‘Aints no more: Why New Orleans takes it 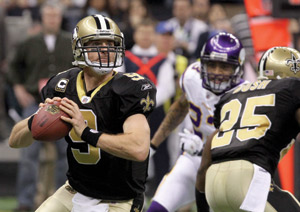 Now I’m not trying to say that Saints quarterback Drew Brees is better than his counterpart in this game, Peyton Manning. Manning is the best QB in the NFL, and that’s obvious. But if there’s a single player that possibly could mean as much to his team as Manning does to the Colts, it would be the man who has led New Orleans to the NFL’s No. 1 offense in three of his four seasons in the Big Easy. His best offensive weapons are a seventh-round receiver from Hofstra (Marques Colston) and a running back who has been well on his way to becoming a bust (Reggie Bush). Brees is the embodiment of this team, and he’s in the middle of arguably the best season of his career, with a 71 percent completion rate and an off-the-charts 109.6 QB rating. He is the New Orleans Saints, plain and simple.

What has NOT always been the case for the Saints is the presence of a respectable defense. At first glance, the numbers for the Saints’ defense aren’t encouraging: Twenty-fifth in the league in total defense, 20th in scoring defense. But against Peyton Manning in the playoffs, the way you beat him on defense is to force turnovers. The Saints are one of the best in the league at that, with 39 on the season. Veteran safety Darren Sharper will be sitting in the secondary, waiting to capitalize on any mistakes that Peyton may make. If unheralded defensive linemen Sedrick Ellis and Will Smith can get any pressure on Peyton without New Orleans needing to bring the blitz (against which Manning always thrives), New Orleans has a chance.

The Saints have a handful of players who are currently nicked up a bit, but none to the point where they need to worry. The focus here is on Colts All-Pro defensive end Dwight Freeney. With Freeney nursing a ligament tear in his ankle and facing uncertainty regarding his playing status, the prospects for New Orleans are going up. Even if Freeney can play, his style of play is heavily reliant on his speed from the outside, and his ankle injury might slow him down for just the split-second that Drew Brees and his lightning-quick release may need. What was potentially a huge area of concern for the Saints, with Freeney up against reserve left tackle Jermon Bushrod, could potentially become an advantage for the Black and Gold.

Coming out of the University of Southern California in the 2006 draft, Bush was being hailed as one of the best prospects of the last decade. What has he had to show for it in his first four seasons? More than 3,000 total yards from scrimmage, 17 fumbles and a handful of injuries. After a spectacular divisional round showing against the Cardinals, Bush had seven carries for 8 yards along with a fumble in the NFC Championship Game. No one will deny that Bush has some incredible athletic ability, but his inconsistency has given Saints fans headaches. A memorable performance in the Super Bowl could save Reggie’s Saints career; another no-show that contributes to a Saints loss could give him the permanent bust label down in New Orleans.