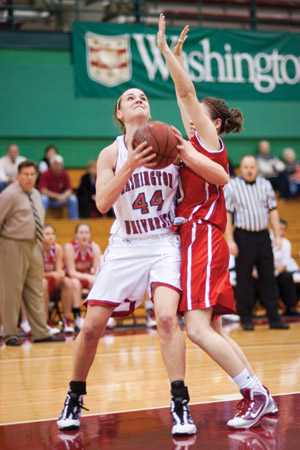 The Bears broke away in the second half of both contests and won their first two University Athletic Association road matches of the season, defeating Case Western Reserve University 65-57 in Cleveland on Friday and then taking out Carnegie Mellon 64-57 on Sunday in Pittsburgh.

“It’s great to hit the road and play a couple of teams that were consistent with the physical and scrappy UAA style,” graduate student co-captain Jaimie McFarlin said.

After winning 11 straight games by an average of over 25 points per game, the Bears had to grind out two of their closest wins of the season, as neither of these contests was in hand until late in the game.

“The UAA is very competitive, and all of the teams are bringing their A game,” junior Kathryn Berger said. “I think it’s beneficial to have a team that plays these close games because you know how to win. Coach Fahey is a great coach, and she knows how to handle these situations.”

The women found themselves in battle from the outset against Case, as the contest went back and forth in the early going. The Bears never had a sizeable lead until going up 26-15 with 5:33 left in the first half. Case came back at the Red and Green with their own run that brought the Bears’ lead down to 31-30 at the half.

Case opened up the second half with five straight points to put Wash. U. down 35-31. Facing their first second-half deficit since their lone loss to Illinois-Wesleyan on Nov. 21, the Bears turned it up. Berger and junior Alex Hoover scored the next 11 points for Wash. U. and the Bears put together a 22-4 run to go up 53-39.

The Bears controlled the game from there and held off a late attempt from the home Spartans, who got as close as 61-54 with 1:56 left. Four free throws in the final two minutes by McFarlin, who finished with 10 points and 10 rebounds, put the game out of reach.

“We pulled away by getting stops,” McFarlin said, “since we don’t have to worry about going against a defense that’s set.”

In Sunday’s contest, the Carnegie Mellon Tartans withstood an early run that had the Bears up by 14-4 halfway through the first half and fought to a 31-24 lead at the break. However, CMU cut the Bears’ lead down to 37-35 with 15 minutes left in the game.

With the lead down to a single point at 50-49 with 8:13, the Bears missed four consecutive free throws and gave the Tartans a chance for the lead. On the ensuing CMU possession, Hoover had a key block and the Bears scored the next six points to go ahead 56-49. The Red and Green made eight free throws the rest of the way, and held on, despite not scoring a field goal in the final 5:43.

McFarlin put together her third straight double-double, with 12 rebounds to go along with 10 points, all of which came in the second half. Berger also threw in 13 points and 10 rebounds, while sophomore Bethany Morrison had six assists and eight points.

The wins were the 12th and 13th in a row for Wash. U., which improved to 15-1 overall and 5-0 in UAA play. The Bears play the latter half of their four game road trip this upcoming weekend, when they will face University of Rochester in Rochester, N.Y., on Friday and Emory University in Atlanta on Sunday.

“We like the change of pace,” Berger said. “It’s nice to get out and travel a little bit.”