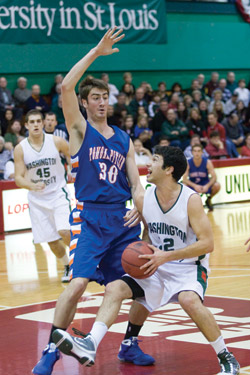 The No. 1 Washington University men’s basketball team was deadly this weekend in the 26th annual Lopata Classic—deadly, of course, from beyond the arc.

In the 76-50 win in the championship game against Pomona-Pitzer College, the Bears connected on 13 of 26 three-pointers. Despite the final score, the game was hotly contested early on.

“You’ve got to take what they give you. Tonight they played the zone [defense], so we ended up getting jump shots,” head coach Mark Edwards said. “I think the key thing is that the players take good shots.”

The Bears connected on four straight three-pointers to open the game, taking a 12-5 lead with 15:44 left in the first half.

Pomona-Pitzer responded with a 16-6 run in the next five minutes, taking a three-point lead on senior David Liss’ jumper. Liss had 14 points in the first half and earned all-tournament honors.

“I don’t know if there was anything we could’ve done in the first half,” senior Cameron Smith said. “He’s a very quick player, and he hit some really tough shots.”

The Bears slowly pulled away from the Sagehens. Graduate student Sean Wallis’s four-point play with 2:47 left in the half pushed the lead to six. Wallis scored nine straight to give Wash. U. a 12-point advantage at the break.

The second half was all Bears.

“It just so happened that I was the guy who they kind of left open in the corner,” Smith said. “I got some really good looks, and when you get good looks, it’s nice to be able to knock them down.”

Liss, on the other hand, was limited to just two points in the second half. Pomona-Pitzer managed only 18 points and shot 29.3 percent from the field.

“It’s one thing to be able to hit shots 10 minutes into the game, and it’s another thing to hit one 30 minutes in the game,” Edwards said. “[Liss] was a very good player, but we were able to rotate people on him and have to make him work very hard, and by the end of the game, I think he was very tired.”

The lead, which was pushed to a game high of 29, sufficiently guaranteed a Bears win. Junior Caleb Knepper and sophomore Dylan Richter each added 11 points.

A similar lead in the first game of the tournament, against NAIA No. 5 McKendree University, almost did not.

A 47-22 Bears lead to start the second half of Friday night’s game was slowly dismantled by the Bearcats. Freshman John Steppe’s back-to-back triples cut the lead to just six with 14 minutes left in the game. Steppe finished the game with 19 points.

“That’s the way the game of basketball is,” Edwards said. “It’s played with two teams, and if they’re competitive teams, they’ll give each other good shots and there’ll be surges during the game.”

Senior Aaron Thompson’s consecutive three-point plays minutes later stopped the bleeding as part of a 10-0 run that increased the lead to 14. Thompson’s 21 points helped the Bears stave off the Bearcats in the final 10 minutes of the game.

“We just kind of stuck to what had been working, and getting good shots and finding the open man,” Wallis said. “That was the difference.”

Wash. U. came away with a 15-point victory, advancing to play the Sagehens in the tournament championship.

“Obviously, it’s a nice honor, but I couldn’t be happier about my team going 2-0, more importantly,” Wallis said. “I’m looking forward to this week. We’ve got some huge games, so hopefully we can keep it rolling.”

Washington University (5-0) returns to action on Wednesday, Dec. 9, against No. 6 Wheaton College before taking on No. 21 Augustana College on Saturday, Dec. 12. Both games tip off at 7 p.m.