Volleyball comes from behind to clinch NCAA title 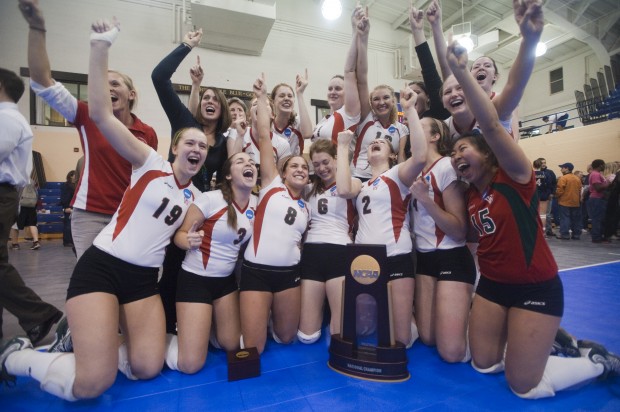 UNIVERSITY HEIGHTS, Ohio — Time to put another banner up in the rafters. The Washington University women’s volleyball team is back on top.

On the grandest of all stages, the Bears shook off a slow start and defeated the Juniata College Eagles on Saturday (18-25, 26-24, 25-17, 25-21) to claim the NCAA Division III National Championship at the DeCarlo Varsity Center at John Carroll University in University Heights, Ohio.

“This is easily one of the greatest success stories I’ve ever been a part of,” head coach Rich Luenemann said.

The championship was the team’s 10th—the most of any school in Division III—and its second in the last three seasons.

“It doesn’t feel real,” senior co-captain Erin Albers said. “This is the best we could have possibly done.”

Fresh off of a thrilling five-set victory the previous day against Hope College, in which the Bears rallied from being down two sets to one, the team had one more strong performance in them. They finished the season at 34-4, with some noteworthy contests and victories along the way to the championship.

“I honestly can’t believe that any of this is happening,” junior co-captain Marya Kaminski said. Kaminski had her best game of the season with 15 kills and a .588 attack percentage. “I feel like I’m in a dream.”

But this contest, like the team’s 3-0 sweep over Juniata on Sept. 18, was far from easy.

Almost immediately in the first set, after a bounty of errors in the opening points, the team found itself on the wrong end of a 9-2 deficit and without either of its timeouts. Trailing by as much as eight points, the Bears rallied their way back and brought the score to 15-13. But they never got closer than that, and a service error ended an ugly first set in which the team hit only .108 percent with seven errors.

“We didn’t have great focus out there,” Luenemann said about the set. “We weren’t executing.”

Then the Red and Green started executing. After trading the first few points, the Bears went on a 7-1 run to go up 12-5 in the second set. Despite a number of service errors, the Bears held the lead throughout most of the set and looked to be in good shape up 20-14.

Slowly, Juniata chipped away and fought off three set points to tie the set at 24. Facing a must-win situation to avoid dropping to a perilous 2-0 hole in the match, sophomore Lauren Budde put down a kill—her fourth of the set—to put the Bears back at set point, and an attack error by Juniata tied the match at one set apiece.

Revitalized, the Bears came out in the third set and put on a show. After another even start with the teams tied at 9, the Bears slowly started to inch away from the Eagles and then pulled away at the end, as a five-point run behind sophomore Tricia Brandt’s serves and a kill by sophomore Kristen Thomas put Wash. U. within one set of the title.

Thomas and Kaminski both had five kills in the set, while freshman Marilee Fisher put up 15 assists to help spark the Bears’ run.

The match’s final set started unlike any of the other three—with the Bears taking an early lead. A long rally on the seventh point of the set ended with a kill by Budde—her 12th at that point—and gave the Bears a 4-3 lead that they never surrendered. Juniata came back and brought the lead to within a point on two early occasions—at 10-9 and 11-10—but the Bears responded with an 8-2 run to go up 19-12.

Fighting for their season, Juniata brought the set back to 22-18, forcing Luenemann to take a timeout. Wash. U. inched forward and came within a point. And finally, after avoiding the first match point and bringing the set to 24-21, Juniata’s Kristin Noetzel put the ensuing serve into the net.

That’s when the celebration began.

After a lengthy team celebration and an acknowledgment of the outstanding season Juniata had as well, the Bears were awarded their plaques individually. Three Bears were named to the All-Tournament Team: Thomas, freshman Kelly Pang and Budde, who was named the Most Outstanding Player of the 2009 NCAA Championship with 93 kills and 87 digs.

Despite losing two of the team’s opening-day starters to injuries over the course of the year and despite being a very young team, the Bears were unable to be stopped by most teams this season.

“Maybe we aren’t the most talented, maybe we don’t have the biggest hitters, but we came out with the most heart,” Albers said.

Albers, along with fellow senior co-captain Laura Brazeal, was a key part of the senior leadership that held together a team comprised of largely freshmen and sophomores. After losing the national championship match to Juniata as freshmen three years ago, they became imperative members of the teams that have won twice since then.

“The team really came together at the end of the season, and we started off with great team chemistry from the beginning,” Brazeal said, “and that’s what made the season amazing for me.”

“Perhaps the best captains I’ve ever had,” Luenemann said. “Whatever you ask of a captain, they did.”

They have set in place the pieces for more title runs in the next few years. The likes of Pang, Fisher, Budde, Kaminski and Brandt will remain key parts of the team for at least another year each.

But for now, they’re going to celebrate what they have accomplished: bringing the title back to Wash. U.