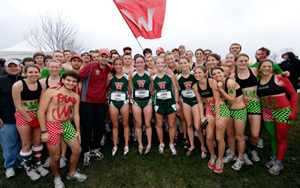 For the first time in Washington University history, the men’s and women’s cross country teams finished in the top 10 at the NCAA National Championships.

The men, entering the weekend meet in Cleveland unranked, placed seventh in their best finish in program history, while the women placed 10th.

The Lady Bears were led by junior Taryn Surtees with a time of 22:36 in the 5-kilometer race, which earned her 13th place overall and All-American honors for the second time in her career. She was followed by senior co-captain Molly Schlamb, who had a time of 23:07, earning her 35th overall. Behind her were junior Jessica Londeree (23:12, 39th place) and sophomore Elizabeth Phillips (24:11, 118th place).

“It was a challenging race,” Surtees said. “The conditions were less than ideal. The women’s team had a solid performance, but it wasn’t perfect.” The Red and Green improved on last year’s 12th place finish in their sixth straight year of running in the NCAA National Championship.

The men were led by sophomore Michael Burnstein with a time of 25:56, finishing in 16th place out of 220 runners in the 8-kilometer race. His performance garnered All-American honors. Burnstein was followed by junior Dave Spandorfer (26:30, 46th place), junior Kwin Keuter (26:41, 69th place) and sophomore Tucker Hartley (26:43, 72nd place).

“We never expected to get seventh. Our goal was just to land in the top 10, so we were blown away when we heard the results,” Burnstein said. This was the fifth time that the men have competed at the NCAA National Championships.

“The meet was incredible. I’ve never been so happy in my whole life,” Keuter said. “This season is proof that the Wash. U. men’s cross country team is one of the best in the country.”

For co-captain Molly Schlamb and the rest of the team’s seniors, the meet was bittersweet.

“I’m proud of the effort the women put into their races on such a tough course yesterday,” Schlamb said. “I’m sad that it was my last cross country race, but I was happy with my performance.”

Many runners are looking back on this season as a stepping stone for greater success in 2010.

“It was a good season and an important experience for our team. Next year we will return six of our top seven runners,” Surtees said. “We have a lot to look forward to.”

Others are focusing on training and making sure they’ll be ready for the winter. “I’m going to be training for some indoor races like the 5k until next season starts. I want to be in nationals again,” Burnstein said.

Most, however, are just happy to be able to relax finally. “Next year should be another awesome season,” Keuter said, “but for now I think we’re all content to bask in the glow of this season.”