The Washington University women’s basketball team ended a four-game losing streak against rival DePauw University Friday night before falling to No. 6 Illinois Wesleyan University on Saturday. The 1-1 weekend was good enough for a second place finish at the annual Tip-Off Tournament, hosted this year by Illinois Wesleyan in Bloomington, Ill.

After falling to DePauw four times in the last four seasons, including the 2007 NCAA Championship game, the No. 1 Bears finally defeated the No. 12 Tigers to open the four-team tournament. Both teams struggled on offense, shooting a combined 36.7 percent from the floor. But Wash. U. went on a few key runs to come away with a 57-52 victory.

“It was pretty exciting. Any game against them is going to be a defensive battle…so we knew that, and we executed pretty well, got a couple lucky bounces, and hit our free throws,” said Jaimie McFarlin, a graduate student and co-captain. 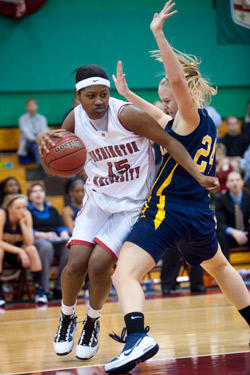 The Bears found themselves trailing 25-17 with 7:46 remaining in the first half, before closing with a 7-2 run to go into the locker room down just 26-24. A layup and free throw from senior Janice Evans and baskets from juniors Kathryn Berger and Alex Hoover brought the team back into the game.

Senior Zoë Unruh tied the contest at 26 with a layup to open the second half, and Berger’s three-pointer with 11:51 remaining in the game gave Wash. U. its first outright lead at 35-34.

The Tigers stormed back to build a three-point lead with just 1:22 remaining, but Hoover erased this deficit with a layup and four clutch free throws, giving the Bears a 55-52 lead with 14 seconds left to play. Lauren Goff missed a three for the Tigers, and Evans finished the game with two free throws.

While the offense never hit its rhythm, the Bears played well on defense, forcing 23 turnovers. Although Evans, McFarlin and Hoover scored 14, 12 and 10 points, respectively, the team shot just 35.5 percent from the floor and 1 for 12 from beyond the arc. The team did outscore DePauw 12-4 from the free throw line, which likely decided the contest.

Wash. U. then clashed with the No. 6 Titans. Fueled by losing on their home floor to Wash. U. in last season’s Elite Eight, the Titans managed a 58-53 win in another sloppy game.

Despite never leading in the game, the Wash. U. defense played well for the most part. The team forced 31 turnovers and held the Titans to 30.2 percent shooting for the night, but foul trouble cost Wash. U. the game. Illinois Wesleyan went 18 for 26 in free throws in the second half, scoring more than half of their 34 second-half points at the line.

Wash. U. shot just 32.1 percent for the game and 25 percent of three-pointers. While Wash. U. tied the game three times, including at 41 with just 4:57 left to play, the Bears could never take the lead.

Evans and McFarlin led the way with double-doubles, with Evans scoring 15 points and grabbing 13 rebounds and McFarlin scoring 12 with 10 boards, but the remaining three starters added just eight points. Sophomore Claire Schaeperkoetter added a career-high 11 points in 20 minutes off the bench.

“We missed a lot of open looks. We didn’t execute against Illinois Wesleyan with 31 team turnovers,” McFarlin said. “You’re not going to win too many ball games with 31 turnovers. We still were in it in the end, which is great and shows the effort of our team, but we didn’t execute at all.”

The Bears return home for the ninth annual McWilliams Classic on Saturday and Sunday. Wash. U. will face the Rose-Hulman Institute of Technology on Saturday at 3 p.m. and will play in either the consolation or championship game on Sunday against either the University of LaVerne or Rhodes College.