Athlete of the Week: Michael Burnstein 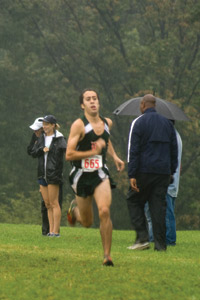 Sophomore Michael Burnstein races at the Big River Running Early Bird on Sept. 5. Burnstein led the Bears to a third-place finish at the NCAA Midwest Regional and a berth in the NCAA Championship in Cleveland on Nov. 21. (Johann Qua Hiansen | Student Life)

After coming off bouts of both the flu and pneumonia, sophomore Michael Burnstein led the Washington University men’s cross country team to a third-place finish at the NCAA Midwest Regional championships this past weekend. At his first race in nearly a month, Burnstein finished 16th out of 282 runners with a time of 24:52.4. The Bears’ third-place finish earned them an at-large bid to the national championship meet.

Student Life: Take us back through regionals this past weekend.

Michael Burnstein: I wasn’t really sure how we were doing. I knew we were all running as a huge pack, which we had never really done before. Normally, we are all spread out, 15 seconds apart from each other, but this time, our whole top four was running next to each other. We ran by our coach with about two miles to go, and our coach told us that we had six [runners] in the top 40. That’s when I knew that we were doing big things, because we did not expect to be that far up.

SL: How big of a race was this for you, coming off pneumonia and leading your team to successful results?

MB: It really meant a lot to me. I did not know what to expect before the race. I figured…I’d either feel great or I was still going to be sick, and I was just going to bomb, but after a couple of miles, and I still felt pretty good, I knew I was healthy, and it ended up working out.

SL: What does this performance at the regional championships do for the team?

MB: It’s huge, I think. The team hasn’t made nationals in three or four years, and we’ve never been third in our region. This is the [highest] we’ve ever finished. We really have a chance to prove that we’re the best team to come out of Wash. U. ever, which is pretty incredible.

SL: Your team faced both the No. 1 and No. 2 teams in the country this past weekend (North Central College and University of Wisconsin-La Crosse). What kind of confidence does this generate, heading into nationals?

MB:  Just the fact that we were only 13 points, which isn’t very many, behind La Crosse University was just a huge confidence booster. Before the race, we pretty much discounted the possibility of us beating them. We figured, “All right, the best we can do is fourth,” and we ended up getting third and almost getting second. We have a lot of momentum coming into nationals.

SL: Regardless of how the team does at nationals, what does the future hold for this team?

MB: Things are looking really good. Not only do we have a ton of guys from varsity returning next year, but the great thing about Wash. U. is that we just have a huge program of guys that are all committed. We have 40 guys on the team. They could be on varsity on most teams around the country…so I think the team’s just going to continue to get better and better every year.

SL: What do you see as your own outlook?

MB: Personally, I hope I can continue to improve. I think I should. My goal is to get All-American this weekend.