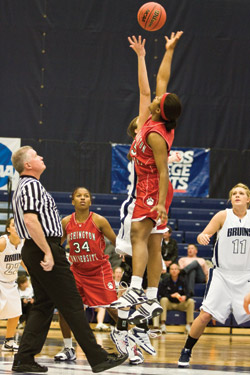 Forward Jaimie McFarlin goes for the jump ball during the NCAA Division III women’s basketball championship last March. McFarlin returns this season as a graduate student and as a third-team preseason All-America selection. The Bears, who seek to win the national title after dropping two of their last three championship game appearances, will host their regular season opener at home at 1 p.m. on Sunday against Augustana College. (Daniel Eicholtz | Student Life)

From 1998 to 2001, Washington University took control of Division III women’s basketball, stringing together four consecutive national championships in the process. Despite losing in the national championship game two out of the past three seasons, the current Bears are hoping to return to that same glory this season.

“In perspective I think we had a pretty good season, and I think in the long term we’re pretty proud of our accomplishments,” head coach Nancy Fahey said in reference to last season, which ended with a loss to an undefeated George Fox team in the national championship game.

Now that the Lady Bears are back and a year older, they are looking to win it all. Four of the five starters from last season—all but guard Jill Brandt—are returning this year.

“It’s hard to get that far and come up short, so I think it’s motivation especially for the girls returning to have a taste of a Final Four,” said senior captain Zoë Unruh, a forward and guard.

“We hope to take that knowledge and use it to our benefit,” Fahey said.

Particularly encouraging for the team is the fact that McFarlin, granted an extra year of eligibilty after a medical redshirt two seasons ago, is back.

“I think the most exciting thing is that last year she was still recovering from her knee surgery,” Fahey said. “So I think it’ll be fun to have her full go at the very beginning.”

The team begins with Augustana College on Sunday and then jumps into the Tip-Off Tournament against perennial contenders DePauw University and Illinois-Wesleyan University. The Lady Bears triumphed over the undefeated IWU Titans last season in the Elite Eight.

But once the Bears make it through their tough non-conference schedule and UAA play begins, things don’t get any easier. The conference, which placed four teams in the round of 16 in last year’s tournament, will keep the defending UAA champion Bears tested.

“We can’t take any game lightly,” Evans said. “No team in the UAA is a bad team.”

Despite knowing the challenges coming later in the season, the team refuses to look past anyone on its schedule. “Our attitude here is that the minute you look past the next game, look at one as more competitive, less competitive, you’ve lost,” Fahey said.

The Bears will look to avoid something they’ve had trouble with in the past couple of years—getting off to a bad start. The team started 4-3 last year and hopes to get things moving a bit quicker this time around.

“I think in some ways it’s easy to get jaded because the last three years we had rough starts and we’ve turned it around every year,” Unruh said. “It’s important just to gain that confidence with a strong start.”

The Bears know that starting on the right foot is crucial to long-term success—and they’ll be taking things one step at a time.

“[A national championship] would be the cherry on top to end my career at Wash. U.,” Evans said, “but right now it’s just as important [to win] our first game on Sunday.”

The Bears start the season on Nov. 15 against Augustana College. Tip-off is set for 1 p.m.