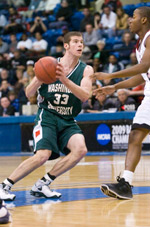 The team has been showered with preseason accolades, picked No. 1 unanimously in polls, and picked to defend their UAA title. With two first-team All-Americans in the lineup, including senior Aaron Thompson, who is preseason player of the year, Wallis and two other returning starters, the outlook on the 2009-2010 season could not be brighter.

“This is a whole new chapter in our basketball history. Even though a lot of the players are the same, they’re one year older; the younger kids are one year more mature,” head coach Mark Edwards said. “Their attitude towards how we’re going to play is going to go a long way in determining how we do.”

The Bears will rely on this experience to guide them through the season. Two key departures from last season, however, have left holes to fill.

Forward Tyler Nading, Wash. U.’s third all-time in points scored and first in games played and steals, graduated, leaving a spot open in the starting lineup and removing a unique dimension from the team.

“I don’t know if outsiders really appreciated all the things he did, from getting a hand on a loose ball, to getting a timely rebound, to getting a tough bucket with two minutes left, down a point, that we really needed. He just made big plays down the stretch,” Wallis said. “Obviously, no one is going to be able to replace Tyler, but hopefully we’ll be able to make due.”

“He’s worked hard in the off-season. If he can give us the rebounding and the defense that Tyler gave us, it’d be great,” Edwards said. “He’s also a very good shooter and scorer, so he gives a little different dimension than we got with Tyler Nading.”

Tim Whittle, the team’s assistant coach for the past five seasons, left to take a head coaching job at Macalester College. Assistant coach Caleb Lawson has been promoted to take his place.

“He worked under Coach Whittle for two years and did a great job of understanding what the role of the assistant coach is,” Edwards said. “He is stepping into that role very well.”

Regardless of the prior success of seasons past, the upcoming season will not be easy. The Bears’ non-conference schedule features a myriad of tough teams.

“We’re going to be very much tested every night going into the UAA,” Wallis said. “People say maybe the UAA might be a little down this year, but it doesn’t matter because this first semester is going to be a big test for us.”

“It was standing room only up at their place when we played them up at their place last year, Augustana coming in…and now we get to have them on our court,” Edwards said. “I think that they are big games. I think they are competitive games. But at the same time, they catch our attention, and they demand our focus or we could have problems.”

The road to a third consecutive national championship begins at 3 p.m. on Sunday, Nov. 15, against MacMurray College in the Field House.

Regardless of the team’s position in March, a championship hardly defines a successful season.

“[The season] is not defined by winning and losing, it’s defined by when you win and lose, and that’s what we realize. The best we can do is go after [a national championship],” Edwards said. “If it doesn’t happen, then we want to be assured of the fact that we put ourselves in a position for it to happen.