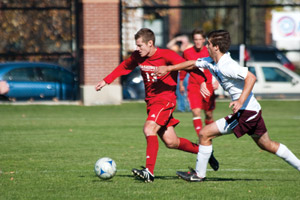 Junior John Duncan dribbles the ball as a University of Chicago defender attempts to knock it loose in the Bears’ 1-0 loss on Nov. 7. (Matt Mitang | Student Life)

CHICAGO—When an official’s call dictated the deciding goal in the game against the University of Chicago, the men’s soccer team’s final game ended much the same way the season first began.

Near the end of the game’s first overtime period, junior Randall Schoen was whistled for a foul at the top of the box. The play set up a penalty kick for the Maroons’ Stanton Coville, who converted to end 99 minutes of scoreless play. In the team’s double-overtime home opener on Sept. 1 against Illinois Wesleyan, two Washington University goals were called back by officials.

“Obviously we weren’t pleased with the result. The game was pretty emblematic of our season in a lot of ways in that I thought we were the better team, but we just had what I thought was an awful call go against us,” junior captain Alex Neumann said. “A lot of times this year we have been the better team, but we’ve just gotten unlucky bounces, unlucky calls, and things just haven’t turned out the best for us.”

Both teams took very few shots; Wash. U. recorded nine, while Chicago took 11. In the second half, the Bears controlled the ball, moving much of the play to the Maroons’ defensive half. Despite the counterattack, the Bears took only two shots in the second half.

“I thought especially in the second half and in the overtime, the team played really well. I was just really proud of the guys,” said senior captain Nat Zenner, who did not play due to injury. “I couldn’t have asked for anything more, and it’s frustrating to lose on a pretty bad call.”

The two teams played a physical game. Each team was issued three yellow cards in regulation. Prior to the game, the Bears had only received six yellow cards in the entire season. The officials also called 38 fouls.

“[The team] played very, very well. There was no difference between our team and theirs—I think my team is better than Chicago, but they’re good,” head coach Joe Clarke said. “Again, we gave up the odd goal.”

Clarke said the game illustrated improvements the team has made throughout the season in midfield play.

“Our entire midfield had changed from last year, essentially, except for Zach Hendrickson. And so that was the biggest thing, developing that midfield and creating an understanding, and that gradually got better and better and better,” Clarke said “I think we became a strong group going in both directions. [We] just needed to be better in the two penalty areas.”

“We got a lot better [at] our ability to really play hard the whole game and be a difficult team to play against,” Zenner said. “Not only is that our team’s greatest strength, but it’s also the thing we improved upon most this year was just being really, really difficult to play against and showing a lot of heart throughout the whole game.”

“I love my seniors. They’re all going to be very hard to replace. Johnny Smelcer I think helped elevate this program probably as much as any player in their time, in their career…Johnny Hengel has been our leading scorer three out of his four years. He’s just a kid [that] if he gets the ball around the box, he’s just our best sharpshooter,” Clarke said. “Ryan Grandin hasn’t gotten the time that others have gotten. He’s handled that like a great team player does…Nat Zenner has been a two-year captain. He moved around to a lot of different positions and always responded well.”

The Division III Men’s Soccer Championship bracket will be released today, and the Bears are eligible for an at-large bid.