Bears one point from UAA crown 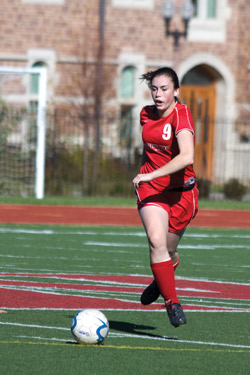 Sophomore Natalie Callaghan dribbles the ball in an Oct. 18 game against the University of Rochester. Callaghan scored the game winner against Brandeis University on Oct. 30. (Daniel Eicholtz | Student Life)

With this past weekend’s wins over Brandeis University and New York University, the No. 8 Washington University women’s soccer team held on to its top spot in the University Athletic Association standings.

After an intense but successful two-match sequence, the Bears have a week to rest injuries, including senior forward Caryn Rosoff’s lower calf strain, and gear up for the University of Chicago.

Wash. U. currently holds a one-point lead over the University of Rochester, and with one game left in UAA play, the Bears must defeat the Maroons to secure a share of the UAA championship and be guaranteed a NCAA tournament bid.

The Bears have not lost since a 1-0 decision to then-No. 6 Johns Hopkins University on Sept. 5.

While the Bears’ first UAA matchup in 12 days ended with a win, it wasn’t the way they would’ve liked to start the long weekend and the final leg of league play, according to players. Rosoff, during the game, was pushed out of bounds and pulled her lower calf as her cleat became stuck in a grate in between the field and track.

Sophomore back Natalie Callaghan drew first blood 33 minutes into the first half. She received the ball from senior Elyse Hanly about 40 yards out from the Judges’ goal.

“The ball was passed back to me, and my teammates told me to cross it,” Callaghan said, “and I [did], and it went over the keeper’s head. I thought someone was going to flick it in, but it ended up just kind of going in on its own.”

While the Judges had many opportunities to score during the game, freshman goalkeeper Clara Jaques did not allow a ball past. The Judges’ offense outshot the Bears 15-13.

Senior Becca Heymann added another goal with 19 minutes left in the second half, off an assist from junior midfielder Julie Tembunkiart.

“[Tembunkiart] chased down a really long ball and miraculously got to it and made a cross to the near post about a yard or two off the endline and kicked it in,” Heymann said. With that goal, Heymann became the tenth most goal-scoring player in Wash. U. women’s soccer history.

In Sunday’s match, both teams were held scoreless in the first half, despite a 10-3 shot advantage for Wash. U. However, NYU found the back of the net first in the second half. During a shuffle in front of the goal, an NYU player fed the ball past Jaques five minutes in to make the score 1-0.

As the minutes waned and urgency loomed for the Bears, sophomore Lee Ann Felder was able to force the game into overtime on an unassisted free kick with 90 seconds remaining.

“Emma got fouled pretty close to the 18-yard-line. Becca [Heymann] and I were standing over the ball, and I decided to take it because I’m left-footed, and it was a good position for a left foot,” Felder said. “It went, luckily, into the goal and into the far post.”

With the score tied, the Bears went into their third overtime of the season. Only 1:28 into the extra time, Heymann yet again scored for the game winner.

The Red and Green face the University of Chicago on Saturday in Chicago at 1:30 p.m.