Athlete of the Week: David Chao 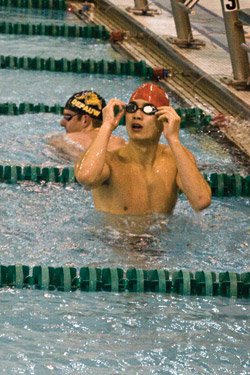 Junior David Chao was the lone Washington University swimmer to win an individual event against Division I SIU-Carbondale on Oct. 30. Chao won the 200-yard freestyle against DePauw and swam the anchor leg in a 400 free relay that was decided by a second on Oct. 31. His accomplishments in the pool have earned him Athlete of the Week honors.

Student Life: Talk about the 400 free relay against DePauw.

David Chao: We knew it was going to come down to that relay. We all got in a huddle and said how we had to win this. When the third guy jumped in, I was already pretty excited. My adrenaline was pumping. When I get on the blocks, I usually look to the guys next to me just to get me more pumped up and saying ‘This is the guy I need to beat.”

Marc (Minowitz, Wash. U. freshman) got a good lead for me. I’m sure I would have been even more excited if it was close. I was actually kind of worried [DePauw’s John Cook] would have caught me. His best time is probably a second faster than mine. He should have won the race. I guess I stepped it up more than him. I love swimming under pressure.

When I dove in, it was no problem. My arms were turning really fast. My adrenaline was pumping. My leg started dying on the last 25. I was like ‘I better not lose this’. I was gritting my teeth and holding on for dear life. I looked up at the scoreboard and everyone was cheering.

SL: What are the season goals?

SL: What do students miss out on by not going to Wash. U. meets?

DC: They’re missing out on seeing how excited part of the Wash. U. community that is the swimmers gets so excited for each other. They’ll be surprised to see how close some meets come down especially the last event. You’ll be winning one time losing the other time.

I got a text from one of my friends who lived on my freshman floor. She was like ‘that was my first time at a Wash. U. swim meet. I never expected it to be that crazy or intense’. You wouldn’t expect a swim meet to be that intense. A lot of the races are pretty close. That just makes for a very exciting and loud atmosphere in the pool.

SL: What would be your fun event?

DC: My fun event is definitely the 100 breast. Brad [Shively, head coach] and the entire team know that the breaststroke is definitely my weakest stroke and they all make fun of me for it. Last year in one of our meets against Principia, he put me in the 100 breast and I actually did pretty well. I won it. Everyone started kidding around saying I should start training. My goal is to break a minute the next time I swim it.

SL: What’s been your most memorable race?

DC: The 800 free relay at Nationals last year. Kevin Leckey was the anchor. When he dove in, we weren’t in third. I think we were fifth or sixth. The other guys on the team were Alex Beyer and Chris Valach. We were all so pumped. Even though we were so tired from swimming our part of the race, we had enough energy to go all out and cheer for him. When he touched and we saw that we got third, that was one of the best feelings that I’ve had in a Wash. U. race.

The Bears’ next meet is the Washington University Thanksgiving Invitational on Nov. 21.