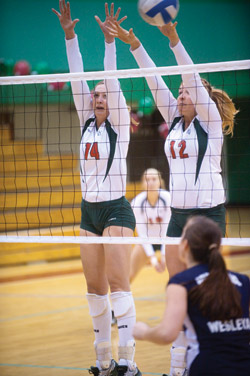 Senior Erin Albers and junior Marya Kaminski go up to block against Virginia Wesleyan College on Friday night. With three wins this weekend, the Bears earned the number one seed for the University Athletic Association championship next weekend in Chicago. (Matt Mitgang | Student Life)

As the legacy of a pair of seniors on the Washington University women’s volleyball team draws near its close, this year’s team may be close to setting in place a legacy of its own.

Against Virginia Wesleyan, the team scored points in bunches, getting seven runs of four points or more, including a nine-point run in the second set. Albers led the team with 12 kills, the last of which ended the match. Freshman Marilee Fisher had a strong showing as well, setting 33 assists in place.

Before the match against Culver-Stockton, Albers and Brazeal—a pair who have helped the team to a 128-17 record and a national title in their careers—were acknowledged for their contributions over their four years.

“It was weird to be recognized like that because we’ve always been the ones recognizing people,” Brazeal said. “So to be on the other side of that, you could really feel the love on this team.”

After the ceremony the team played another strong match, overcoming slow starts in the first and third sets to take all three. Albers again led the team with 13 kills, while Brazeal—who started the game at libero—tied freshman Kelly Pang with 12 digs.

The Bears played strongly in their lone Saturday match during the first and third sets, while overcoming a sluggish performance in the second to hold on to yet another sweep. On top of yet another excellent showing from Albers (14 kills), sophomore Lauren Budde (10 kills, 16 digs) and freshman Drew Hargrave (10 kills) helped lead the way for the Bears. Pang, Albers and Fisher were named to the all-tournament team.

When the tournament was over, two subjects were on everyone’s minds: the seniors and championships.

“Laura and Erin have been two of the most outstanding captains I have had in my coaching experience,” head coach Rich Luenemann said. “There’s no way I could come close to asking for anything else from the captains. They’re the best.”

Albers and Brazeal, two of the school’s top players in kills and digs, respectively, were both upset to see their careers come near their close.

“This team has been our family here at Wash. U., so it’s really sad that this is potentially our last home weekend,” Albers said. “I’m really going to miss all the girls, and the team has been the highlight of my Wash. U. experience.”

Yet, the two still have time to add to their lists of accomplishments.

With this weekend’s victories, the team finished a perfect October and has won 19 matches in a row against Division III opponents.

Despite the Lady Bears’ success, they refuse to get too far ahead of themselves.

“We can’t look forward to the next game, because it won’t matter if we don’t focus on the game we’re playing,” Brazeal said.

“Our concentration is on the next point,” Albers agreed. “I have a good feeling about this year, and we just need to take it slow and not get ahead of ourselves.”

The Bears will be the top seed in next weekend’s UAA tournament. They face University of Rochester at noon on Friday, Nov. 6, and Case Western Reserve University at 2 p.m. On Saturday, the Bears play New York University at noon. The championship match, should the Bears make it, begins at 4 p.m.