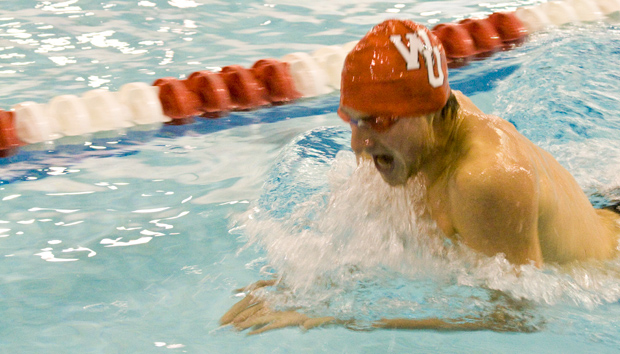 Senior Alex Beyer competes in the 200 breaststroke. Beyer took first in this event, the 400 IM and was part of the first place 400 freestyle relay team. The men defeated DePauw 151-147. (Jared Bullock | Student Life)

Coming off a loss at Division I Southern Illinois University Carbondale, the men’s and women’s swim teams both claimed victory over DePauw on Saturday.

“The guys came through with a really solid swim. That’s a good way to finish it,” head coach Brad Shively said. “[There was] competitiveness in the relays. I liked seeing the relays out there fighting and scrapping, getting a little down and dirty. I think that’s the sign of a team that’s got some grit.”

The relay, comprised of senior Dan Arteaga, freshman Mark Minowitz, senior Alex Beyer and junior David Chao, finished the close race less than one second ahead of DePauw’s ‘A’ relay in 3:10.07.

“I’m a huge relay swimmer; I get really pumped up especially on anchor leg,” Chao said. “We had to win that relay to win the meet, so I kind of like the pressure.”

The men’s team took first place in seven events in addition to the winning relay and the 200 medley relay. Sophomore Chris Valach won the 1,000 and 500 freestyles. Seniors Beyer and Dima Galkin claimed first and second place in the 200 breaststroke.

Beyer also won the 400 individual medley. Chao took the top spot in the 200 freestyle, and fellow junior Michael Flanagan swept the butterfly events. Chao was also the lone Wash. U. swimmer to win an event against SIUC, taking the 100 freestyle in 47.40.

“We got a couple of victories against two very good teams…I thought it was great. We swam a meet last night, and [the team] didn’t make any excuses,” Shively said. “I thought we swam a lot tougher today than we did [against SIUC]. I just thought we were really competitive, really combative out there.”

“I’m pumped. This is really fun,” Powers said. “We’re definitely very good at getting pumped up…We’re really good at having men’s and women’s [teams] working together.”

Shively noted the teams’ consistency as a key to the wins. With two dual meets in two days, the team worked on moving swimmers in different events to test its strengths.

“I don’t think there’s an event that we have where we are great, and we’re trying to make sure that any event that we’re pretty good at, if it’s a strength, it stays a strength,” Shively said. “We’re also trying to shore up, and we swam people in a lot of different things between [SIUC] and [DePauw] to try and figure out what we have.”

The Bears continue competition on Nov. 21 at the Washington University Thanksgiving Invitational.