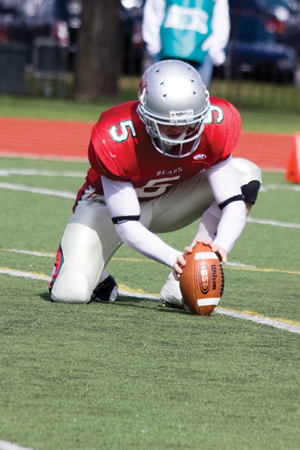 Senior linebacker Bryce Buchanan places the ball for a field goal in a tough 24-20 loss for the Bears against the College of Wooster on Oct. 17. (Daniel Eichotltz | Student Life)

In the football team’s 24-12 win on Oct. 24 over Ohio Wesleyan University, Washington University senior linebacker Bryce Buchanan recorded a team-high eight tackles. In seven football games this season, he is third on the team in tackles with 36 and leads the team in sacks with 1.5. Buchanan’s consistent play this season and strong performance against the Battling Bishops have won him Student Life Athlete of the Week.

Student Life: Could you describe your performance against Ohio Wesleyan University last week?

Bryce Buchanan: I was playing safety on defense, and I played a little bit of [cornerback] too. We were facing a team which…does a lot of running, so when I was playing [cornerback] it was almost like I was playing outside linebacker. I was taking a lot of blocks at the line of scrimmage…A lot of times everybody would be pursuing to the ball, and then the runningback would have nowhere to go except straight at me, so it made it pretty easy to get a lot of tackles.

SL: How does the defense get to be so dominant against OWU, allowing only 13 yards in the first quarter and one first down the whole first half?

BB: We really scouted them well. Our coaches do a real good job of analyzing film…they really know what plays they’re going to run in certain situations…So we had a real good idea of what they were going to do, and we just came out ready to play.

SL: What kind of message does that early performance send not only to the team you’re facing but to the rest of the teams on your schedule?

BB: We’re going into conference [play] right now, and I think a defensive performance like that was something that we really needed. We shut them down. I hope that sends a message to our upcoming opponents that our defense is here to play; our team is here to play. We’re not like our record shows–we’re a much better team.

SL: It just seems like the whole season, especially the past few weeks, the defense has been playing on a much higher level. What has been working so well?

BB: I think just everybody is doing their individual roles. We always, every practice, run a drill called “pursuit drill,” where we basically just practice running to the ball. It’s not a fun drill at all, but it really makes it so when we go out on the field, everybody is running to the ball at full speed. Nobody is taking a play off. We’re just working hard.

BB: It would be a real good thing. I’m a senior, and since I’ve been here, we haven’t won a conference championship, so it’s been a long time coming. I really hope we can get out there and do it this year. It would be a good way to leave off this season and carry everybody into next season too.

SL: What’s one thing you want to accomplish by the end of the season, football-wise, other than winning the UAA championship?

SL: Who has shaped your playing mentality the most?

BB: Everybody shapes it. From my dad growing up, my dad was a coach, so since I was a little kid he was coaching me, and then the coaches here do a great job, and our defensive backs coach…has a lot of experience. He really knows how to get you in the right state of mind to go out and play. He just really motivates you well.

Conference play starts this weekend at 1 p.m. (ET) on Saturday against Carnegie Mellon University in Pittsburgh.