Men’s soccer: Bears use bench in loss to Berry, fall to no. 4 Loras 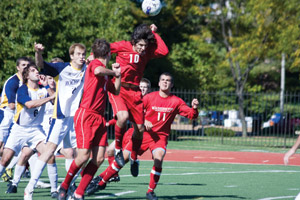 Sophomore Patrick McLean heads the ball in an Oct. 18 game versus Rochester. McLean led the Bears with three shots in a 0-1 loss to Berry College on Friday. (Daniel Eicholtz | Student Life)

The Washington University men’s soccer team fought hard but suffered 1-0 defeats to Berry College and No. 4 Loras College over the weekend.

In preparation for the Loras match, the men’s soccer team devoted much of its strategy to substitution in Friday night’s game against provisional Division III opponent Berry College.

Twenty-two Bears saw playing time and substitutions were made based on time.

“Today was kind of an experiment, it was a game that didn’t really matter, [Berry is] not a D3 team, so it doesn’t really count toward our NCAA qualification,” junior midfielder Cody Costakis said. “Everyone got in, we pre-arranged substitutions based on time…about 10 minutes before [the game] we came out we worked on free kicks, deciding who would be where on each shift.”

The two teams played a fast-paced, scoreless first half. Starting senior goalie John Smelcer played only in the first half and made two saves.

“The scouting report on [Berry] was that they were very skilled, they [have] good size, they’re a big team,” junior midfielder David Klein said. “But for the first half when we were playing our regulars, we were controlling the game, so we controlled the game against a very good team.”

The Vikings scored the game’s only goal 15 minutes into the second half when Luis Salazar got a shot past junior goalie Andrew Serio.

“It was a really hard fought game. Berry is a great team, they have a lot of international players who are really skilled, really know how to play the game,” junior captain Alex Neumann said. “Our goal was to come out hard and try and get the win, but we were also trying to save our legs for Sunday.”

Near the end of the second half, Washington University made several threatening shots. One by sophomore forward Patrick McLean was deflected over the top of the goal, while another by senior forward John Hengel hit the crossbar. The Bears were disappointed with Friday’s loss, but maintained focus on the Loras match-up.

On Sunday, the Bears began the game against Loras in controlling fashion. At the end of the first half, Wash. U. led in shots 11-4. Six shots were on goal, with two each for McLean and senior captain Nat Zenner. The team also took five corner kicks to the Duhawks’ two.

However, in the second half the Duhawks upped their offensive attack and evened the offensive stats. Each team took five shots and three corner kicks, but the Bears did not take any shots on goal and Loras controlled possession throughout the majority of the half. With 20 minutes to play, Loras defender Matt Splitgerber scored.

The Bears looked to even the score near the end of the half on a corner kick from Costakis. When the ball was deflected, Costakis connected with junior Harry Beddo on a second pass, but Beddo’s shot missed high.

The Red and Green continue their road trip with UAA play against Brandeis University on Oct. 30 and New York University on Nov. 1.