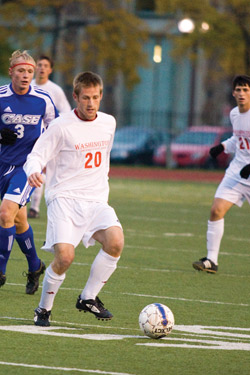 Senior forward John Hengel controls the ball in a 2-0 victory against Case Western Reserve on Friday, Oct. 16. Hengel is the leading goal-scorer for the Bears with six goals this season. (Daniel Eicholtz | Student Life)

As the men’s soccer team enters the final stretch of its regular-season schedule, senior captain John Hengel leads the Bears with six goals. Hengel led the Bears to victory against Fontbonne on Oct. 13, scoring twice in the team’s first three-goal performance. Hengel’s contributions earned him Student Life Athlete of the Week honors.

Student Life: What is the most important game remaining on your schedule?
John Hengel: Loras is a big game this Sunday because we’ve played three teams so far ranked in the top 10, and we’ve competed with all of them. They’ve all been close games, but we’ve just lost a close game in all of them. Loras is a top-10-ranked team. They’re also in our region. We need to prove we can beat a team of that caliber if we want to get into the tournament.

SL: You lead the team in goals. Does one stick out as your favorite?
JH: My goal against Emory, definitely. We lost to them my first three years here, and last time when we went to Emory, they shut us out 3-0, and their fans were really obnoxious, and they were shouting stuff at us all game, and it was an embarrassing loss. We went there and shut them out, and it was good to know that I ended my career with at least one victory at Emory.

SL: What is the biggest challenge about UAA soccer?
JH: The biggest challenge is whether you’re playing the worst team or the best team in the conference, you’re at risk of losing because, no matter what, it’s going to be a close game. All the teams are really physical, and they wear you down a lot. This past weekend where we had two UAA games, everyone came off the weekend really sore, and we had a couple days rest, but even still, I’m still feeling the weekend.

SL: The team just celebrated Senior Day against Rochester. What part of your game have you improved most while at Wash. U.?
JL: I would just say my touch, overall, because [head coach Joe Clarke] has these things where we have to go to the racquetball court, and we go in there every so often, and you have to take a soccer ball, and you kick it off one wall, juggle it, then kick it off the next wall and go in a circle. I’ve been doing those now year-round for four years, so my touch has improved a lot.

SL: What do you think is your greatest strength or skill?
JH: I would say composure in the box. I don’t lose control or panic so I’m able to score easier.

SL: Coach Val Pelizzaro is retiring at the end of the season; what’s an important lesson you’ve learned from him?
JH: He’s got a strong “never give up” attitude. He’s nearing 80 years old, and he still tries to play possession with us. He quoted that one of the reasons he’s retiring is that he can no longer play soccer with us, which I thought was funny because coaches coach 30 years after their knees don’t allow them to play soccer anymore, but when I was a freshman he was playing with us every week almost. But now it’s only a couple times in the season.

Coach Pelizzaro was honored on Friday, Oct. 16, in a game against Case Western Reserve University. The Bear’s final home game is at 7 p.m. Friday against Berry College.