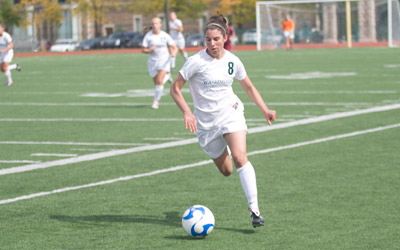 The Washington University women’s soccer team seized control of first place in the University Athletic Association (UAA) after a strong weekend. The Bears defeated both the University of Rochester and Case Western Reserve on Sunday and Friday, respectively.

“We knew we had to win both games,” senior co-captain Becca Heymann said. “Now, we have a little bit of a relaxation time.”

With three games left in league play, the Bears have a realistic chance to end the season as UAA champions.

“[It’s] so, so, so exciting—it was a battle. It puts us in a great position for the NCAA tournament,” said Libby Held, senior co-captain and defensive anchor. “We’re heading into the rest of the season on this huge momentum. We’ve won a couple in a row now, and no one can stop us.”

Freshman goalkeeper Clara Jaques completed her fifth shutout as the team handed Case Western Reserve its first conference loss on Friday.  The Red and Green’s defense held the Spartans to only three shots throughout the entire game and no corner kicks.  Wash. U., on the other hand, dominated on the offensive end with 17 shots and eight corner kicks.

Sophomore Emma Brown opened up scoring with an assist from sophomore Lee Ann Felder 16 minutes into the first half. Felder, having received a pass that threaded Case defenders from senior Caryn Rosoff, lofted the ball to Brown, who one-touched the ball past the Spartan goalkeeper.

The goal was Brown’s 11th of the season. She continues to lead the UAA in goals scored along with Rosoff, who has 10 goals.

The score rested at 1-0 until six minutes remained in the second half. Brown took the ball past the Spartan defenders before feeding Heymann for her first goal of the 2009 season to seal the game at 2-0. The Bears held onto their offensive momentum into Sunday’s game.

On Senior Day, against No. 21 Rochester, the Wash. U. Class of 2010 stepped up as Heymann and Rosoff both scored to lead the team to an overtime victory. The match marked the halfway point of UAA play, as well as the recognition of the seniors on the team.

The Bears were the first to draw blood, as Heymann scored her second goal of the season. After receiving the ball from a corner kick, her strike ricocheted off a Rochester defender and into the net.

Rochester answered swiftly. Two minutes after the Heymann goal, Yellowjacket forward Erin Carballo found the upper corner of the goal. The game went into the second half knotted at 1-1 and remained tied until overtime.  The Bears didn’t enter extra time without opportunities, however, as they outshot their opponent 10-8 in regulation.

With only 5:56 left in the first overtime period, Rosoff received a cross from Brown. Rosoff deftly flicked the ball past the goalkeeper to end the game with a victory.
“It was a great cross, and I kind of flicked it hoping it would go somewhere. It went in—I got really lucky.” Rosoff said of her game winner.

“She’s always trying to do something cheeky like that, but to have it go in for such a big goal for us, it’s really exciting,” Heymann said.

Not only did Rosoff’s goal cap a successful weekend, but the goal also made her the fourth player in Washington University history to have 100 points in a career. The Bears are now in first place by one point above Rochester.