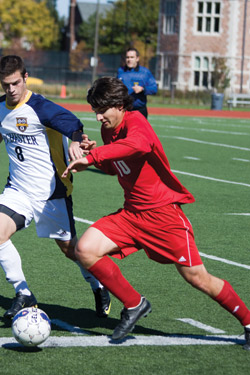 Sophomore forward Pat McLean pushes the ball down the field during an unfortunate 1-0 loss to University of Rochester on Sunday. (Daniel Eicholtz | Student Life)

The men’s soccer team split a pair of University Athletic Association (UAA) games on Friday and Sunday, coming away with a win over Case Western Reserve University and a loss to No. 6 University of Rochester.

In Friday’s game against Case, the Bears and Spartans played a scoreless match until the 35th minute. When senior captain John Hengel was fouled, sophomore Pat McLean collected a loose ball and set up junior John Duncan for his second goal of the season.

“[The goal] was basically the hustle of my teammates. John Hengel, he actually got fouled really hard and Pat picked up where he left off, dribbling in,” Duncan said. “The ball just kind of got left out in the box for me, and I was able to follow it up and place it in the corner.”

Case Western controlled the offensive stats, besting Washington University 20-7 on shots, but the team credits its success to intensity.

“It was one of those times in the season where we needed a result and we came out and everyone played well as a team. We hustled and had an intensity that was to a new level,” Duncan said. “We always kept pressure, smart pressure. We kept the ball moving quickly and tried to dictate the game.”

Sophomore Michael Chamberlin brought the Bears to a 2-0 lead with a goal early in the second half. A free kick from senior co-captain Nat Zenner set up the score.

“[Coach Joe Clarke] talked to me before the game about being due to score,” Chamberlin said. “I wanted to try and get it over the top and get my head on the ball, and I was able to…I was glad I played it.”

In the final minutes of the game, Case Western lost senior defenseman Will Green to a red card after he fouled McLean. Senior goalkeeper John Smelcer finished the contest with his sixth shutout of the season.

The Bears were limited in creating offensive opportunities in the first half against Rochester on Sunday. Both teams were held scoreless in the first 45 minutes of play.

“We didn’t play as well as we could have in terms of keeping possession of the ball,” Zenner said. “We kind of got sucked into the way they wanted to play; they’re a big, physical team and they used that to their advantage by playing lots of long balls and challenging for head balls.”

The Bears opened the second half with an increased offensive attack. However, the team had to continue to battle Rochester’s corner kicks. The Yellowjackets had an 11-2 advantage for the game.

“We just talked about trying to play our game, trying to keep the ball on the ground and connect a lot of passes. At halftime we talked about coming out with a lot of fire, and I think that’s what caused that little burst,” Zenner said. “Although [corners] were the biggest challenge, I think it was the one we responded best to.”

After 83 minutes without a goal from either team, Rochester briefly caught Smelcer out of position and scored a late goal that was the game-winner.

“What I can say is we did battle, and we didn’t really deserve to lose that game, especially across the back defending so many corners and long throw-ins,” Zenner said.

The Bears face Berry College in their last home game of the season at 7 p.m. on Friday, Oct. 23.