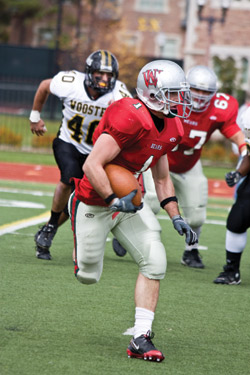 Junior Jim O’Brien runs the ball during last Saturday’s football game vs. the College of Wooster. O’Brien rushed the ball for 105 yards and earned a touchdown, but the Bears couldn’t hold onto the lead losing 20-24. (Daniel Eicholtz | Student Life)

The College of Wooster had already been stopped on their previous two trips inside the red zone. Faced with a fourth and one at the 30-yard line, time running out, and an inspired Washington University defense in the way, another stop seemed probable.

“‘Very disappointed’ is the best way to sum up my feelings, because it was definitely a team we could’ve beaten and a team we should’ve beaten,” senior defensive back Tim Machan said.

Despite a stalwart defensive performance in the second half, Holter drove all over the field, accounting for 409 total yards, 272 through the air and 137 on the ground.

“One of the problems [in stopping Holter] was sloppy tackling. There were a couple instances where we had him either for a short gain or no gain at all and missed the tackle,” Machan said.

The Bears came out strong after the opening kickoff. Charging down the field, backed by two pass interference penalties, Wash. U. quickly took the lead. With 9:58 left in the first quarter, junior running back Jim O’Brien capped the nine-play, 61-yard drive with a one-yard touchdown run.

“We were talking about it before the game…our last 10 or 12 games, whoever has scored first has ended up winning the game. We knew [scoring early] increased our chances of winning a lot,” junior receiver Tom Gulyas said.

Wooster responded with 17 unanswered points. After a field goal and a touchdown pass, Holter’s 30-yard pass with only 1:30 left in the half bumped the score to 17-7, with the Fighting Scots on top.

Freshman running back Chris Castelluccio’s 41-yard return on the following kickoff set up a score for Wash. U. Gulyas caught a pass in the corner of the end zone from junior quarterback Stephen Sherman, cutting the deficit to 17-13. The extra point attempt was missed.

“Two-minute drills—that’s something we do a lot in the game, just because the situation calls for it. It’s something that we work on twice a week during practice,” Gulyas said. “It was really nice to be able to execute almost perfectly. It felt like we almost scored too quickly.”

The Bears would settle for a 17-13 score entering the break.

Their first drive coming out of the break would change that score. Senior captain Matt Glenn, getting his first major playing time since an injury in the season opener, scored the lead-taking touchdown. His one-yard push into the end zone came after a 13-play, 68-yard series.

“[Matt Glenn] is definitely a great short-yardage [running] back…on a third and one, just let him plunge up the gut and just move the pile into the end zone,” Gulyas said.

Wooster was stuffed in the second half. After being forced to punt on their first two drives of the half, their third drive came down to Wash. U.’s goal line. On fourth and goal, the Bears’ defense came up with a stop on Holter’s quarterback keeper, taking over on downs.

“We had a lot of confidence at that point. We had the confidence that we could beat them and we were definitely feeling good,” Machan said. “But that quarterback gets loose on one play and it changes everything.”

Holter would not be held down for a third time, scoring the go-ahead touchdown with only 2:18 left in the game.

“We were playing man [coverage] behind, so the secondary was playing the receivers. Any time your secondary is in man [coverage], they don’t react as well to the run because their first read is to protect the pass,” junior linebacker Kyle Huber said. “That gave [Holter] some extra room to run and as soon as that guy gets room, he gets going and he can put a move on some guys.”

Given a chance to respond, the Bears came up short. Sherman’s fourth and 17 pass was broken up, ending hopes for a win with 1:18 on the clock.

Sherman finished the game with 150 yards through the air, while O’Brien had 105 on the ground. Gulyas’s reception put him over the career 1,000 receiving yards mark.