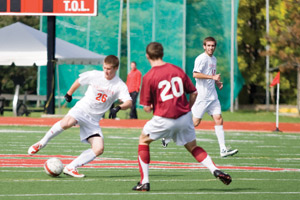 Bears midfielder Zach Hendrickson works past a Carnegie Mellon defender. Hendrickson, a sophomore, had one shot on goal in the soccer team’s 2-0 loss to the Tartans. (Nora Jehle | Student Life

A slow start by the men’s soccer team was the driving force behind a 2-0 loss to No. 9 Carnegie Mellon University on Sunday.

“Coming into it we knew this was going to be a big test for us. Carnegie Mellon is a great team,” junior co-captain Alex Neumann said. “They came at us hard, they were aggressive, really from the get-go, and that posed a few problems.”

Carnegie got ahead early; forward Ricky Griffin scored his first goal of the day off a corner kick in the fifth minute and followed up with another score 16 minutes later. The goals added to Griffin’s total of 15 for the season thus far.

“I’m not happy with the goals that we gave them,” head coach Joe Clarke said. “We need to make teams score better goals than we made them score today, but they got them and we really put ourselves in a hole.”

The Bears began to counter following the Tartans’ second goal and finished with 10 shots for the half. Despite several threatening attacks at the goal, Washington University was unable to score.

“We created some chances, and we weren’t able to finish them. Their goalie made a good save or two, and we just didn’t do what we needed to do when we got into great positions,” Clarke said. “We played much better after the first 25 minutes. We’ve just got to continue to improve; that’s all there is to it.”

Neumann said adjustments and advice from Clarke helped the Red and Green respond. After coming into the game, sophomores Patrick McLean and Kevin Privalle combined for six shots, while sophomores Zach Hendrickson and David Kanoff each had one.

“It was a combination of a few things: I think our subs that came in off the bench provided us with a ton of energy, they did a really good job,” Neumann said. “At halftime Coach Clarke gave us a really fiery pep talk and told us that he knew we could beat this team.”

Ultimately the Bears’ improved play could not overcome the early two-goal deficit.

“We’re a very slow starting team,” McLean said. “We always pick it up…But we picked it up too late.”

After allowing two goals in the first half, senior John Smelcer shut down the Tartans with four saves in the second half.

The loss was the first for the team since playing Sept. 22 at Principia. Both the Panthers and Tartans are currently ranked in the nation’s top 25.

“[We need to] start strong. I’m not sure exactly what we’re lacking; it might just be the warm-up, but we always start weak,” McLean said. “We just need to get pumped up before the game better.”

The Bears face Fontbonne University on Tuesday, Oct. 13, at Francis Field starting at 7 p.m. The team will collect donations for the Sunbeam Foundation, a charity started by Wash. U. soccer alum Jeff LaBoskey that helps raise research funds to help find a cure for childhood bone cancers.