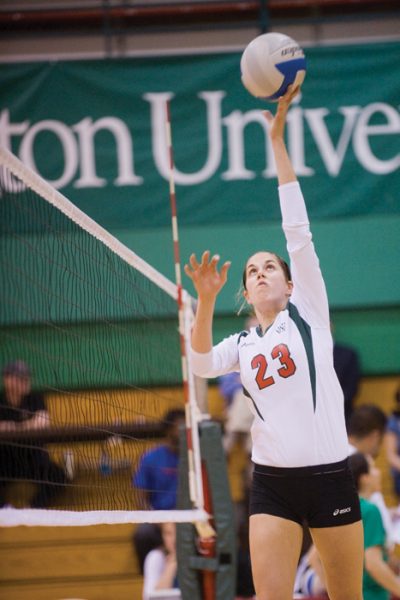 Senior setter Vicki Blood dumps the ball over the net against Greenville College in the Field House on Tuesday night. The Red and Green went on to win the match in three games. (Matt Mitgang | Student Life)

The fifth-ranked Washington University women’s volleyball team demolished unranked Harris-Stowe State University and unranked Greenville College in a succession of two quick and impressive matches. The Bears beat Harris-Stowe (25-12, 25-9, 25-14), and after an hour-long break, they defeated Greenville (25-17, 25-20, 25-9) on Tuesday.

The three sets against Harris-Stowe each followed the same pattern. The Bears grabbed the lead early and slowly but surely increased it throughout the game.

“We came out pretty strong,” junior tri-captain Marya Kaminski said. “We played our game really well, we’ve been practicing all of pre-season, and I think we executed the plays that we practiced…up to par. Obviously there are things to improve, but yeah, I think we started the season off really well.”

“It took everyone for the win,” Thomas said. “I definitely wouldn’t have gotten that many kills if it wasn’t for the passes or our setter…I was really proud of everyone.”

The win was never in doubt, and the Bears walked away hitting a blistering .366.

Greenville College proved to be a tougher opponent.

The first two sets were relatively close, but the Red and Green pulled through, gaining confidence and shutting down Greenville in the final set.

“Erin Kasson was cranking on her jump serves, which proves to be disheartening for an opponent’s passing system,” head coach Rich Luenemann said.

The next volleyball tournament is the Bears Classic, a home tournament this Friday and Saturday against Millikin University, Hope College and Augustana College.
“We can only get better,” Kaminski said. “We have plays that we didn’t even run during that game, because we didn’t need to…we have really good chances of being first this year.”