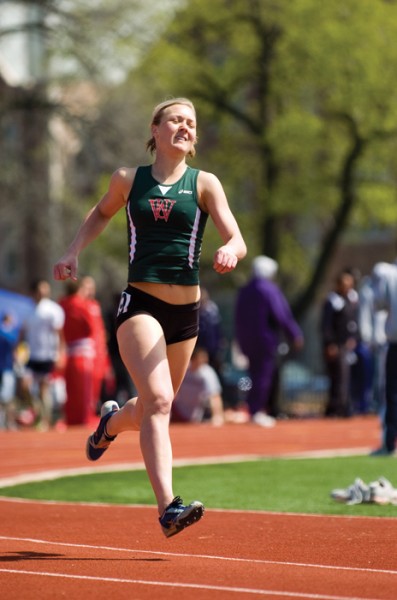 Washington University’s men’s and women’s track teams both won UAA conference titles Sunday. The women accrued 231.5 points, topping second-place Emory University by 62 points while the men totaled 221 to Carnegie Mellon University’s 152. This was the women’s 10th title in a row and the men’s first since 2006.

“I was completely excited. It wasn’t in my mind that we’d win by 65 points. It was just an amazing feeling,” sophomore Scott Pettit said. “A lot of the credit went to how hard everyone worked as a team.”

The team started out the meet with four wins on Saturday before racking up 14 titles Sunday. “It started early on Saturday and continued,” junior Keith England said of the team’s momentum.

Alli Alberts was the star of the meet, bringing home four UAA titles. She won the 400-meter hurdles in 1:03.98 and the javelin with a 38.74 meter effort. Both of these marks provisionally qualified her for the NCAA championship meet. She teamed with freshman Elisabeth Stocking, sophomore Kelli Blake and junior Molly Schlamb to win the 4×800-meter relay in 9:27.31. Finally, running with fellow seniors Erika Wade, Krystyn Stowe and Danielle Wadlington, she helped to win the 4×400-meter relay in an NCAA provisional time of 3:55.99.

Wadlington was also a multi-event winner for the Bears. In addition to the 4×400 win, she won the triple jump, leaping 11.65 meters and the 100-meter hurdles in a time of 14.58, both of which topped the provisional standard.

On the men’s side, senior Pierre Hoppenot brought home three titles of his own. He swept the sprints, winning the 100-meter dash in 10.97 and the 200 meter dash in 22.05. He, along with fellow senior Todd Mowry, junior Iboro Umana and sophomore Tom Gulyas, won the 4×100-meter relay in 41.93 seconds, setting a school record.

Umana brought home multiple titles of his own as did sophomore Ben Harmon and senior Tanner Coghill. Umana also won the 400-meter dash in 49.68 seconds. Coghill took the 400-meter hurdles, running them in 52.90 seconds to provisionally qualify for the NCAA championships and the triple jump, leaping 14.03 meters. Harmon completed the pole vault sweep, clearing 4.44 meters and also won the long jump, leaping 7.12 meters, another provisional mark.

England completed the javelin sweep, tossing it 60.48 meters to set a UAA record and provisionally qualify for the NCAA championships. Freshman Tyler Jackson also won the 110-meter hudles in 15.03 seconds.

Two Bears also recorded provisional marks in events they did not win. Wadlington provisionally qualified in the long jump after finishing second with a leap of 5.63 meters. Classmate Aubrey Edwards finished third in the hammer throw with a toss of 49.52 meters, good enough to top Delaina Martin’s school record.

“It was really exciting,” Edwards said. “I didn’t know at the time. I totally look up to her. It was great to be on the same level.”

In the women’s meet, sophomore Taryn Surtees and freshman Jessica Londeree took second and third respectively in the 10,000 meters. Junior Hope Rathnam took third in the 3,000-meter steeplechase as did the women’s 4×100-meter relay, composed of junior Caitlin Hartsell and seniors Wadlington, Trudi Pugatch and Molloy. Molloy also finished second in the 100-meter hurdles and the 400-meter hurdles as did Wade in the 400-meter dash. Jackey took third in the 800-meter run while Wadlington finished in the same spot in the 200-meter dash.

On the field, seniors Jessica Lane and Colleen Moreland cemented Wash. U. dominance in the pole vault, taking second and third. Edwards also finished third in the shot put.

Overall, the team was very excited about the results. “This is one of the only meets where [the team] actually matters,” Alberts said. “We’re a team at conference. It matters if you beat the team next to you.”

The team will compete next at the Pacesetter Invitational in Terre Haute, Ind. on May 2 in continued preparation for the NCAA championships. The team is hoping to carry this success throughout the rest of the season.

“I think all of us are really excited about the momentum,” Edwards said. “We’re all starting to think that if we can continue on this swing of energy there’s a nice chance of doing well at nationals.”