Urinal is the word on campus 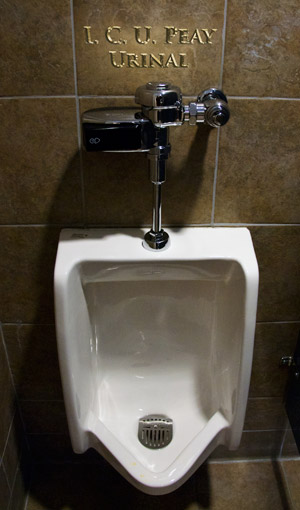 When Phil Pizzonmee was an undergraduate student at Wash. U., it was common for buildings to be named after big donors. Although this practice is still commonplace, unique nooks and crannies are now being named for donors. This week, Mr. Pizzonmee became the first alum to have a urinal named after him on campus.

The urinal, in the men’s bathroom on the first floor of Crow Hall, is near and dear to Mr. Pizzonmee’s heart.

“I was a physics major in college, and it brings me such great pleasure to know that my donation will aide the future physicists of the world,” Pizzonmee said of the urinal, which he contributed to the physics building.

Now when students use the urinal, they will be able to see the Pizzonmee plaque staring up at them.

Pizzonmee seems to be a trendsetter. Mr. Irving Cohen Umrath Pea, another Wash. U. Arts & Sciences alum, has also decided to buy a urinal. His plaque will read: I.C.U. Pea.

Students are fans of the new plaques.

“I think that it is great that alums are getting involved. It is really quite nice to know that they care about the school, not just the big things like buildings, but the small details too,” freshman Harold Atkins said.

These urinal plaques follow the trend of naming corners after alums. Members of the Wash. U. community expect electrical fixtures to be the next set of alumni-sponsored goods. Look out in the next couple of months for lights, speakers and projectors named after high-level donors. To have a urinal named in your honor, you can contact Chancellor Mark Wrighton directly.