What you knead to get it on

As Doug’s sister Judy from Nickelodeon’s 1990s cartoon “Doug” so aptly put it, “In order to eat liver and onions, you must become liver and onions!” Although this line exists merely in reference to Doug’s unabated hatred for the food combination, it references the corporal, almost-earthy quality of the dish. While the smooth exterior of the liver meat reminds us of our organs (and genitals), the rustic, pungent odor of the onions, reminds us of the erotic scent of the body. Combine these symbolic qualities with the texture and heated semblance of these foods across your naked partner’s body, and you’ll be ready for a night that’s bound to get physical.

This pig-derived fat concentrate, similar to butter, can be compared erotically to whipped cream or even the crude oil once used in ancient Roman homosocial activities. Mostly consumed in contemporary British cuisine, lard can also be considered akin to the sexiness of a British accent to Americans: foreign, dashing and somehow more culturally cultivated. Even more, the solid form of lard is much like any pocket of skin you might massage during foreplay. So spread it on, spread it around, use it like lube or knead it between your fingers to stimulate your fleshy creativity.

Stocked with a comparable amount of calories to that of semen, the flavor and consistency of ranch dressing strewn across a salad of phallic vegetation such as baby carrots and celery sticks is sure to do the trick. Nearly crude in its bottled form, once exacted upon a salad, sandwich or naked body of curvature, ranch dressing comes alive for one to lick lustfully, perhaps in lieu of medically risky bodily fluid consumption. 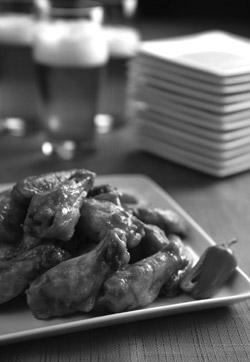 Although chicken wings don’t have the same vegan-friendly properties as the soy dog, these superbly acidic and scrumptiously sticky complements to ranch dressing will bring the power and scent of true football-fan masculinity to any bedroom situation. Smear their spicy drizzling sauce on lips for extra-oomph to serious necking or on the inner thigh to make for a tantalizing trail to your lady’s sweet spot.