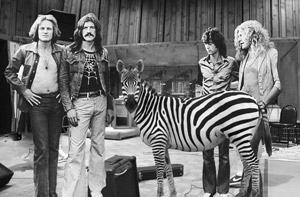 Led Zeppelin zonked the Zambian paparazzi yesterday when the zealous rock band announced that their next album would have a heavy jazz-influence. However, the zaniest, jacuzzi-sized, dizzying announcement was yet to come: Zeppelin will record with album with wild zebras.

“People call us crazy, but Zeppelin has always zigged when others have zagged,” Jimmy Page said. “This isn’t navel-gazing. We agonized over this dizzying decision, and we’re proud of it.”

“You could say the paparazzi is the enzyme that’s trying to ooze into our cell, break us down, unzip our plan and sieze control of our dream, leaving us with zilch,” John Paul Jones added.

The band said the hardest part was not, shockingly, fuzing the band’s heavy metal sound with the zebra’s whinny. In the biz, it’s called ‘room and board.’ Zeppelin calls it ‘a maze and some haze.’ Getting the zebras together waz not hard, but keeping them safe from hungry buzzards proved challenging for the lazy band.

“The buzzards were like enzymes, and they wanted to unzip the zebras!” Jones said. So, with the help of a fog machine, the band shrouded the hooved animals in a hazy fog, keeping them in a maze and protecting them from buzzards.

But what is the album about? The band’s lips are so tight that a Ritz cracker couldn’t fit through.

“Here’s a quiz: what do the Ozone Layer and lizards have in common?” Page said. “Tell me when you figure that out, ’cuz that’s the answer to our question, the calzone to our pizza.”