“Oops! I should probably put this down,” she says airily.

My roommate and I are at Patricia’s, an adult store at the intersection of Grand Boulevard and Gravois Avenue. Patricia’s is a chain that has locations around the Midwest, but this one is especially popular with St. Louis area college students. Even Washington University kids break out of the bubble for this place. 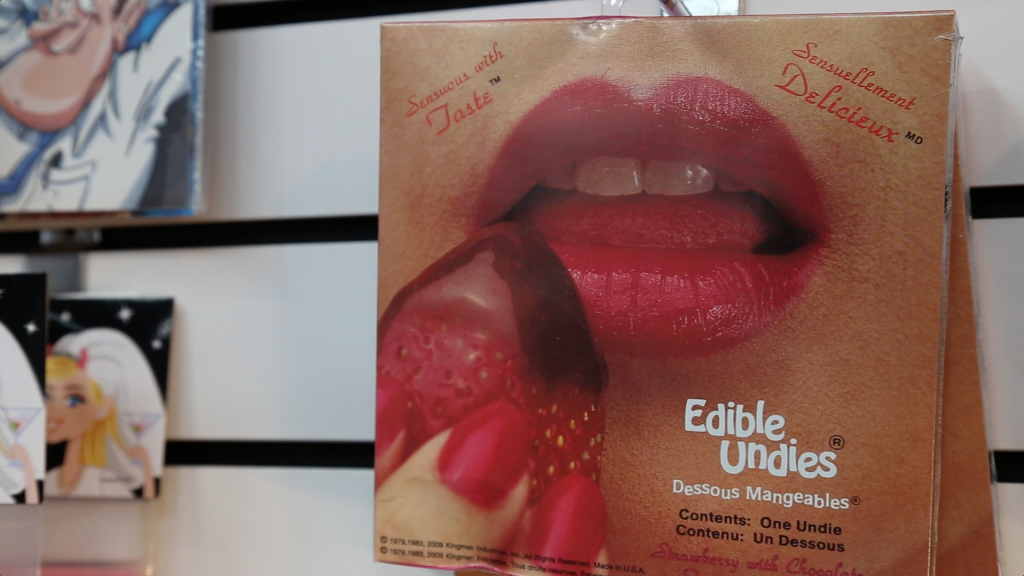 My roommate and I scan the front wall, which is covered in penis-related novelty items. We make a note to come back and grab some penis-shaped rainbow candy and a penis-shaped cake pan. We should have a party soon.

Thai is her nickname. She’s been at the company for six years and has been part of the industry for 15 years. She’s been a manager at this particular Patricia’s location for about four years. She is lanky, with light-brown shoulder length hair and glasses. Her demeanor is casual, relaxed. She has a knack for establishing a friendly rapport with anyone who enters the store. As a daughter of a college professor, she has no problem being social. When you walk in, you don’t even know Thai, but you immediately trust her. Any reservations about feeling strange or awkward in a sex shop dissipate simply from witnessing Thai’s own effortless comfort.

The store is organized, in her words, from “mild to wild.” The most “chaste” products—lingerie, novelty items, birthday cards—are near the front. The items further in the back are strategically placed away from the storefront windows.

Thai walks me through the store, pointing out the sections along the way. She explains a few interesting products, like blow job Pop Rocks (put them on skin, and they’ll fizzle when you run your tongue over them) and sour apple-flavored lube (not recommended for vaginas because it’s made with citric acid, which can be uncomfortable).

Thai reads my expression. “I would think that, unless you doused this in enough lube to swim in, this would wind you up like spaghetti,” she laughs.

But, as she emphasizes throughout our conversation, everyone is different. And thankfully, there are toys available to fit pretty much anyone’s needs.

Thai picks up a bullet with a wire that connects to the battery-operated, speed-controlling remote. This is a toy that she frequently recommends to first-timers. It’s small, inexpensive and has multiple speeds—all ideal qualities for a beginner.

With a laugh, she emphasizes one point. “Make sure it’s waterproof. It is very hard to wash something that you cannot put in water.”

Regardless of how you choose to integrate toys with a partner, Thai reminds customers to always consult with their partners first. Consent is mandatory in all forms of sexuality; buying products for sex is no exception.

“Before you try anything, talk to your partner,” Thai says. “Even if it’s about a penis ring.”

The definition of consent includes making sure your partner is OK with using certain toys, but it also includes staying in tune with their needs. Thai has had people come in—both men and women—who have wanted things like “stay-hard” creams to prolong erections or supplements to increase sex drive. The first thing she asks before going any further is, “Did you talk to your partner about this?” Sometimes, customers are surprised to learn that they need to communicate with their partner about the issues they’re having.

“I can help you orgasm. I can help you have better sex. But, what I can’t help you do is talk to your partner,” Thai asserts adamantly. “And that’s the one thing that I wish I could, because that’s the most critical thing. “

“We [women] are great at producing lubrication,” she says. “We are far less great at getting it where it needs to be. And that outer area where it doesn’t get lubricated can get sore.” 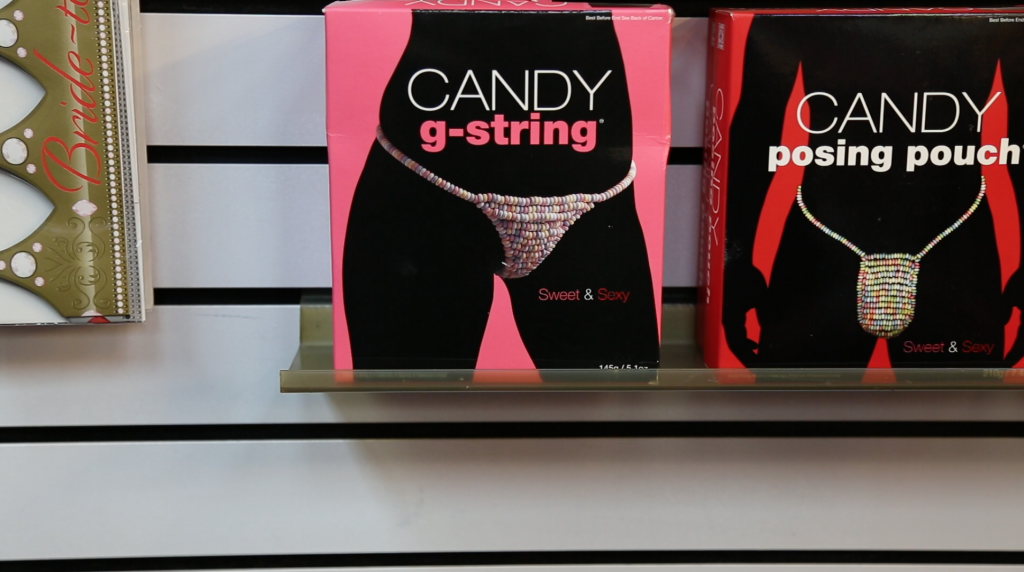 When we think of lube, a lot of us jump to brands like K-Y Jelly. They’ve got sleek packaging, a nifty color scheme and sexy commercials featuring beautiful people lolling around in bed (that sometimes even air around prime time! Prime time!). Weirdly enough, Thai tells me, K-Y lube was actually introduced to the market for hospital use in 1904.

“Originally, K-Y was used by doctors [who] needed a lubricant to use for speculums and things like that that wouldn’t erode their gloves,” she says.

While doctors were using K-Y, regular people were using oil-based lube. Soon, they figured out that oil dissolves latex, making condoms useless (that is, unless you wanted a living, breathing accident running around). This realization brought the need for a new product to be introduced into the market; thus, K-Y expanded out of hospitals into the homes of the general public. It makes sense, then, that the brand has the money to spend on massive ad campaigns—since its inception, it’s been backed by the pharmaceutical industry.

Even then, it’s not the best lube. To the contrary, it actually might be one of the more abrasive lubes—it can dry your skin out, if you use it too frequently.

“K-Y has a lot of sodium hydroxide in it, which is another word for lye,” Thai explains. “It’s a very small amount, but it can get pretty uncomfortable over time.”

I’m still wrapping my head around the fact that K-Y, which I always subconsciously equated with “$$$hot sex$$$,” started off as a medical product. Thai drops another cool lube fact on me, this time about the brand Astroglide. It was developed at NASA in 1977.

“Astroglide was originally a coolant used for the space program, or it was supposed to be. It didn’t work very well, but it had more-or-less body-safe ingredients,” Thai says.

That was it. They called it “Astroglide” and turned it into lube.

And then, there’s spermicidal lube. Thai keeps a lonely tube of it on the bottom shelf. It’s hidden away for a reason—spermicidal lube is made out of a chemical called nonoxynol-9. Originally an ingredient in cosmetics, it kills sperm cells by poking holes in them. Unfortunately, nonoxynol-9 also pokes holes in the rest of our cells, which can have negative implications. Spermicidal condoms also use the same formula. According to Thai, the Center for Disease Control actually dissuades consumers from using spermicidal condoms, since they significantly raise the risk of contracting STDs, especially HIV. The thing is, spermicidal condoms are only .02 percent better at preventing pregnancy than regular condoms. Your best bet? Just use a regular condom properly.

And if you’re using condoms as your primary form of contraception, please Do. Not. Use. Oil. As. Lube. When Thai first mentioned the fact about K-Y coming onto the market because people needed water-based lube, I realized that I didn’t even know you weren’t supposed to use oil-based lube with condoms. Why didn’t they ever include that in high school sex education? Rock beats scissors, paper beats rock and oil dissolves latex. It could’ve been that easy.

That is, unless you’re not using latex condoms. Even though nonlatex condoms are commonly purchased by people who have latex allergies, they also can be useful for men who prefer a looser fit. Traditional latex stretches, but snaps on snugly like a rubber band. Nonlatex condoms stretch differently; they also provide a snug fit, but they’re less constricting at the base. The downside of nonlatex condoms is that they’re more expensive. They’re also usually made of either lambskin or polyurethane. Lambskin smells weird and does a poor job of protecting against STDs. Polyurethane is an ingredient that’s also in paint varnish, so take that as you will.

The store caters to diverse sexualities; there are just as many LGBT-specific products as there are heterosexual. Additionally, there are also materials related to medical needs. Patricia’s carries breast massagers for cancer patients, as well as graduated dilators to help women who need to carefully maintain their vaginal openings, such as those who have vaginismus and trans women who have just gone through surgery.

“The industry’s still catching up,” she acknowledges. “It’s jarring to look down and see something that’s not the race that you are.”

“See?” she smiles, motioning to the rainbow cock. “Why wouldn’t you want something with that much pride?”

“To do this job, you need a sense of humor,” she says. The job also requires that she control her sense of humor, especially when customers unknowingly ask her silly questions. She’s good-natured about it—she would never make someone feel bad. Still, she’s had to contain her giggles every once in a while.

“Once, a customer asked me, ‘Does a butt plug make you feel like you need to go to the bathroom?’” she says.

“No.” Thai is good-natured about it. “Butt plugs probably wouldn’t be that popular if they did.”

It’s 9:59 p.m. We’ve been talking for an hour—right up until closing time. It’s too late for me to buy those penis candies now. But that’s not a problem. My roommate and I can come back soon. Just ask Thai—we’re all welcome at Patricia’s.