The Game of Love

For several years, Student Life has relied on photo spreads of Washington University athletes to fill our pages. This year is different. The sports section conducted an informal survey with the athletes we have covered in the past. Here are some of the best responses: 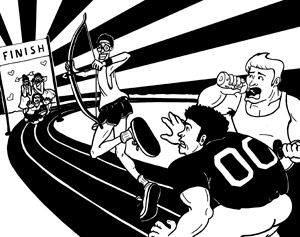 What do you love about your sport(s)?

Playing softball gives me thighs like what what what. Basically, we all have nice thighs and asses, which is awesome.
Antonia Ferguson, softball

I love the fast-paced and competitive nature of the game, while still being lighthearted and not taking itself too seriously.
Neel Kotra, Contra (men’s Ultimate)

The first thing I love is that [football] is all reaction. You get out there and you don’t have time to think. There’s thinking that goes in right up until the ball is snapped, but once the ball is snapped, you just go in and you do what you can. You react, but it’s all natural from that point in.
Jim O’Brien, football

I love how swimming wakes me up in the morning. When I don’t have morning practice, it takes me a couple of hours to wake up fully. But when I have practice first, I start my day physically tired, but mentally ready to go.
Dima Galkin, swimming and diving

What can fans love about your sport(s)?

Often we wear spandex and participate in strip fests changing into street clothes after a game.
Antonia Ferguson, softball

Fans can love the fast pace and the frequent exciting plays. Also, it’s not too low-scoring like some soccer or hockey matches can be, but it’s not crazily high-scoring like basketball. In addition, since it is a relatively unknown sport, by watching and enjoying it, you don’t feel like a bandwagon fan.
Neel Kotra, Contra (men’s Ultimate)

The fact is that it’s such a team sport. You need everyone firing at the same time to succeed, and watching when a team is successful, you can really tell that they’re doing the right things.
Tim Machan, football

We have a dedicated group of guys who demonstrate the team concept very well. We all compete very hard and realize that basketball is a sport we all love and respect.
Sean Wallis, men’s basketball

People have evolved for living on land. There’s something magical about seeing people excel in water.
Dima Galkin, swimming and diving

Fans should love soccer, because it is a game that is constantly being played, which allows for a lot of fan interaction and amusement, as we have proved during our performances for the girls’ soccer team during the playoffs.
Peter Jebson, men’s soccer

What do you love about D-III and playing at the D-III level?

I’m not a math student, but last I checked III > I.
Claire Voris, softball

I enjoy competing at the Division III level, because we’re all on an even playing field; nobody gets their tests taken for them.
Patrick Ryan, cross country/track and field

I love the challenge, I love the fact that people don’t necessarily know that I play a sport; that they can see me as somebody first, as a student first or as a person first.
Jim O’Brien, football

I love D-III because everyone is competing and training because they love it, not because they are paid to do it. It’s the true love of the sport.
Molly Schlamb, cross country/ track and field

How much does your sport help in getting guys or girls?

If you’re on a varsity sport, you’re pretty much guaranteed to be in good shape. Certainly sports give you a lot of confidence.
Chris Malaya, track and field

I can’t say it’s helped me get any guys, but I have been very successful with the ladies. I think my sexy uniform, my seductive face in media photos, and the amazing tan I get during the season all contribute to that success.
Zoë Unruh, women’s basketball

Not at all, really. I pulled the varsity athlete line once kind of jokingly, but kind of serious, just to see if it worked. It did not work. I think Wash. U. girls get more aroused hearing that you got a perfect score on your ACT or that you want to be a doctor or researcher or something.
Miguel Davis, baseball

Girls generally love tall, skinny, nerdy guys, so I would say cross country is instrumental in me “getting” girls.
Will Forrester, cross country

How does being in a varsity sport affect your relationship/dating life?

Being on the track and cross country teams has been great for my dating life. Going to bed early, staying in on Friday nights, and losing eight to 12 hours of sleep every Saturday really give me a leg up on the dating scene.
Patrick Ryan, cross country

[Being in a relationship] gives you an extra someone you can talk to about your frustrations, or goals, or whatever you’re doing with the season.
Michael Chamberlin, men’s soccer

It’s never hindered my dating life, but I’ve only ever dated athletes…so that may be the hindrance.
Leslie Davis, women’s soccer

It kills it. I have no time for females, but I’d like to use this issue of StudLife to put out an ad if I may—Dylan Richter, 6-foot-3, wears number 20, looking for a fun cute girl to spend hours gazing into each other’s eyes. Facebook message if interested. ;)
Dylan Richter, men’s basketball

What are the best or worst sports pickup lines that you’ve heard or used?

Hey there, need some help with your ball handling?
Zoë Unruh, women’s basketball

I’ll show you my breast if you show me your fly.
Karina Stridh, swimming and diving

Get ready for a throw-in, because I’m about to cross a line with you.
Michael Chamberlin, men’s soccer

The best is probably lying and saying you play for the basketball team.
Jim O’Brien, football

Basketball is like sex because with enough practice, you can score consistently.
Zoë Unruh, women’s basketball

Softball is like sex because we are always going for a home run.
Antonia Ferguson, softball

Football is like sex because we go hard, we go long, and at the end you’re really sweaty.
Tim Machan, men’s football

Soccer is like sex because it is unwelcome in the workplace.
Paula Davis, women’s soccer

Cross country and track are like love because they drive you crazy, but you keep coming back for more.
Hope Rathnam, cross country/track and field

Baseball is like love because our season is very, very long. It takes a lot out of time and energy out of you, but in the end is definitely worth it.
Miguel Davis, baseball

Swimming is like love because swimmers don’t play “games”, and aren’t always looking to “score” like most other athletes. Instead, we’ll dedicate ourselves for hours and hours for a single event, and will continue to work on it whether we’ve had the time of our lives or a terrible setback.
Karina Stridh, swimming and diving