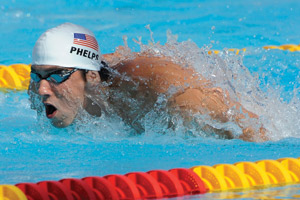 Michael Phelps is hot. Now, when I tell people this, I’m always surprised about the negative reactions I get. Is it just me, or has Phelps suffered from fair-weather fans of his attractiveness? I didn’t hear anyone calling Phelps ugly when he was on the medal stand. What’s not to like about the greatest Olympian of all time?

Sorry, I’ll repeat that point for emphasis, just in case your memory of August 2008 has slipped away: Phelps is the greatest Olympian of all time. His performance at the 2008 Olympics was nothing short of amazing. Summarizing what he did in an article like this almost seems an insult to how significant his feats were—not just to swimming, but to the Olympics and to all sports. He earned a gold medal in each of his eight events, thrilled the world with a 0.01-second victory over Millard Cavic in the 100 butterfly, and swam a leg of the 4×100 freestyle relay that stunned the seemingly unbeatable French. Phelps was able to put American audiences normally captivated by football, baseball and basketball on the edge of their seats, as they cheered swimmers to victories by hundredths of seconds. In his pursuit of Olympic greatness, Phelps set seven world records. The aftermath of Phelps’ success in Beijing helped revitalize swimming, and increased membership in member clubs of USA swimming by the thousands.

Millions of people were in such awe of his abilities for those few weeks of the summer, that it overshadowed something that for most seemed unforgettable: six gold medals at the Athens Olympics four years earlier. It was those Olympics that turned Phelps into a household name. Phelps became a sensation just as I started swimming competitively, and he not only reinforced my passion for the sport, but redefined what it means to be a dedicated swimmer. He achieved world-class times by taking on arguably the strictest training schedule known—he didn’t take a day off for five years straight. 1,825 consecutive days in the water.

Nitpick all you want about his goofy smile or extra-long torso; Phelps has some extraordinary physical qualities, not to mention some of the most impressive athletic talent in history, and that puts him among the hottest sportsmen (well, all men).

One of my best friends once told me that you could dial 911 on good abs. If you’re in a state of emergency, Michael Phelps is your guy. Maybe it comes from the tens of thousands of yards he swims daily training for various international competitions, or it’s the product of what swimmers refer to as “dry land” training—weights, running, strengthening exercises. Whatever it is, you would be hard pressed to find a set of abs better than Phelps’. When do you stop counting “packs” anyway? Six? Eight? Twelve? Only a body of Phelps’ caliber can make the alien-like Speedo LZR racing suit look attractive.

How about a little scientific data for the doubters? Where can you find such data? On Facebook, of course. If you’re a fan of Phelps, as I am, you can see his profile pictures. On one insanely cute, off-center head shot of Phelps, there are 50 comments, all informing Michael how attractive he is. If the 50 comments aren’t enough, 815 people thought the picture was pleasing enough to like it.

You think Phelps is ugly? Tell that to his 14 gold medals.