The two main pre-orientation programs focused on entertainment are Raise Your Voice: Poetry and Comedy and KWUR: Adventures in Radioland. I interviewed KWUR students and counselors to learn what the program is really about. 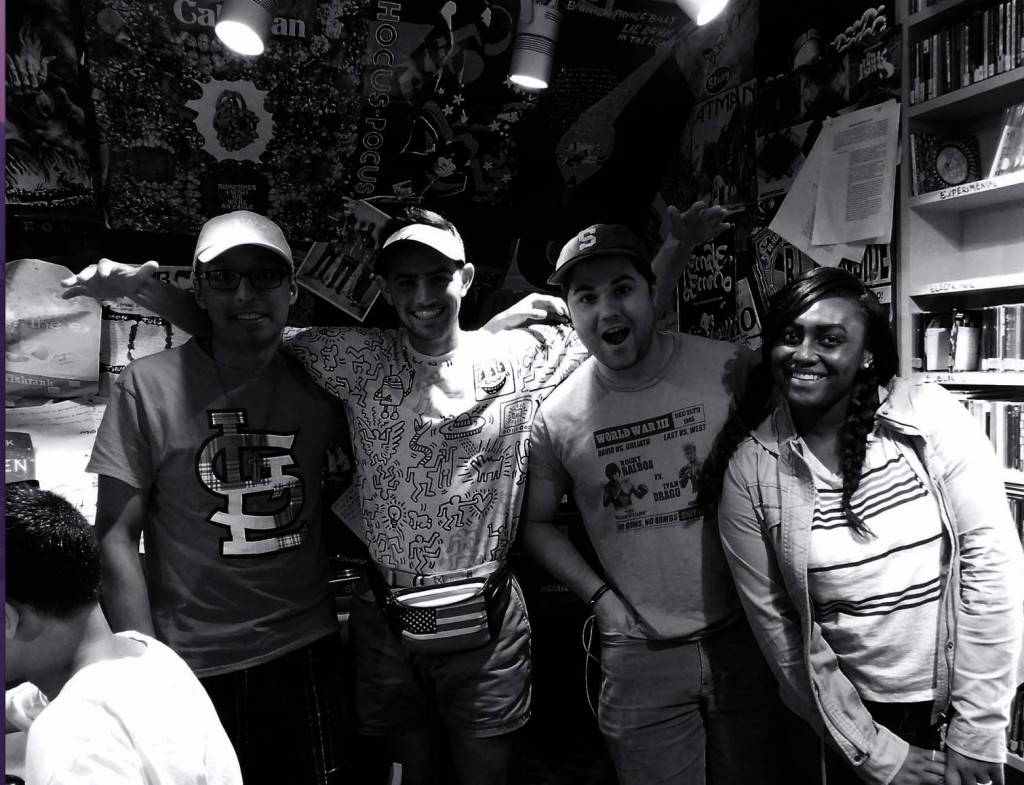 KWUR: Adventures in Radioland participants Cesar Chavez, left, and Sam Fisher, as well as counselor Nick Machak hang out in the KWUR studio. The program included trips to performances around St. Louis as well as training for the KWUR radio station.

Nick Machak, a senior and KWUR counselor, said the purpose of KWUR is to “provide an alternative media outlet for the St. Louis community radio than what you can typically find on a normal FM station.”

Machak also said that KWUR is “not for profit and completely student run,” which he feels makes the station more “educational.” The KWUR pre-orientation continued this education by bringing in speakers like Eleni Anas, KWUR’s former general manager, as well as taking the students to performances in St. Louis and the vintage vinyl record shop.

Freshman Cesar Chavez said that, though he previously knew how to use a microphone, “it’s very different using a [microphone] with a [sound board].”

Freshman Sam Fisher also commented that he enjoyed “transitioning between vinyl and CD and using the [auxiliary] cord.”

Machak said that the KWUR music collection is larger than that of KDHX, a prominent St. Louis radio station and added his gratefulness that the students have access to all of the music. Fisher and Chaez then convinced me that the radio overplays Meghan Trainor and Taylor Swift, when I asked them how they would change mainstream radio if given the chance. Fisher told me about some local bands based in St. Louis, including the Conformists and the Brainstems, before attempting to explain the genre of “math rock,” but quickly found that I am far from a musical genius.

I also asked the two freshmen if they would join KWUR once the school year started, to which they answered a resounding yes.

Sophomore Mia Sitterson, one of the Raise Your Voice pre-orientation counselors, said their program is “a new pre-orientation that brings together what used to be the improv and WU-SLam pre-o’s” in order to introduce students to improv, sketch comedy and slam poetry.

I went on to ask freshman Elizabeth Onder about her experience in Raise Your Voice, which she compared to being in a family, even from day one. She also explained that, shortly after meeting the group of seven young women, she grew unafraid to read her poetry to them and to show her vulnerability.

Her friend in the group, freshman Claire Kozak, responded, “We cry, therefore we slam!”

Another freshman, Amanda Everett from Pinebluff, Ark., told me that on the first day of the pre-orientation, previous WU-SLam students performed poetry for the incoming freshmen, which “opened her eyes to what slam poetry is.”

Freshman and poet Ruth Durrell explained how much she’s grown as a poet through the program because she began focusing on her own life in her poetry but grew to enjoy conversation with her new found family so much that it inspired her to begin to speak about their conversations more than her own life and experiences.

This year’s freshmen certainly proved themselves to be a talented group, excited to get involved on campus and to showcase their talents to the Washington University community. It goes without saying that the class of 2020 is one to watch out for!