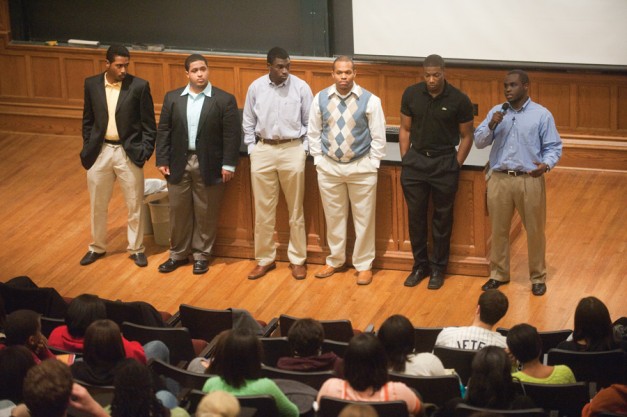 Six black students who were not allowed into a bar during their senior class trip speak during a town hall-style discussion about diversity.

The 2009-2010 school year was filled with new campus developments, student activism and controversy, allowing Wash. U. students to make their mark on the events of the year.

The year began with the opening of the new South Forty House, which not only included sophomore housing, but also a wide selection of new dining options, including new grill items, comfort food station and kosher station. Construction on the South 40 proceeded around the Swamp to finish building several new modern dorms.

Despite the construction on both the South 40 and the Danforth Campus—focusing on new engineering buildings—the University had budget cuts in other areas. The lower endowment prompted the decision to close the Center for the Study of Ethics & Human Values by the end of the year.

At the same time, adjunct professor Jeff Smith resigned from his Missouri State Senate seat and dropped his course for the semester after he was charged with allegations of obstruction of justice.

As the year continued, many seniors attended their class trip to Chicago, where they felt that Original Mothers Bar discriminated against several of their black classmates by not allowing them into the bar. The seniors responded with a protest the next morning outside the establishment. After much discussion back on campus, the senior class decided to take a stand against discrimination and involve national anti-discrimination organizations. The bar agreed to publicly apologize to the seniors and to sponsor diversity training for its employees.

Student Union established the Diversity Affairs Council to provide students with a resource to deal with issues of diversity.

On another note, Bon Appétit stopped providing tomatoes to the University community from November to March. Dining Services decided to take a stand against Florida tomato farms not paying their tomato pickers enough money. By springtime, they were able to purchase tomatoes from other states whose farms upheld worker standards, and tomatoes returned to campus.

Coal was another hotly debated issue on campus throughout the year. The University established the Consortium for Clean Coal Utilization at to reduce the usage of coal, but the University continued its dependence on coal companies. The school year ended with the restoration of Metro services as Proposition A passed. Chancellor Wrighton, in support of this bill, was even featured in commercials to encourage its success. The increased taxes provided more Metro services, such as more bus routes and more frequent trains, over the following year.