Your guide to Mardi Gras 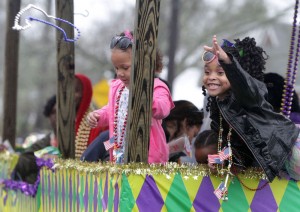 John Fitzhugh | Biloxi Sun Herald | MCT
While the term “Mardi Gras” conjures more images of drunken revelry than it does of history, the celebration in fact has an interesting story behind it. The quirky day, which includes outlandish activities and crazy costumes, is the perfect escape for those of you that haven’t escaped the confines of Olin Library in more than a week. Never fear, even if you don’t know the difference between a crawfish and a po’ boy—our staff has assembled the answers to some key questions about this celebration. This way, you can offer a historical fact in exchange for beads rather than having to flash a stranger, unless the latter gets you in the Mardi Gras spirit.

What is Mardi Gras, anyway?

On March 3, 1699, French explorer Pierre Le Moyne d’Iberville and his men set up camp on along the Mississippi River and, remembering the celebrations occurring in their home country around that time of year, named the spot in present-day New Orleans “Point du Mardi Gras.”

Masked balls were held throughout the 1700s and soon developed into raucous street celebrations. The first documented parade of costumed partiers occurred in 1830, but their unruly behavior caused the banning of such activities until an organization of men called Comus began the traditions of a themed parade with floats as well as tableau balls. 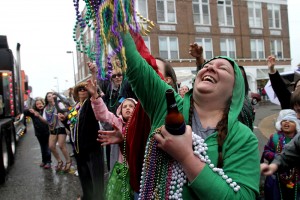 Why is Mardi Gras so big in St. Louis?

While most people associate Mardi Gras with the heavy French influence in New Orleans, St. Louis definitely has its share of fun on Fat Tuesday. True, St. Louis was founded by French settlers, but that has little to do with why St. Louis has one of the biggest Mardi Gras celebrations in the United States.

In 1980, a man named Hilary Clemens and some of his friends decided to make a big festival out of the day. Clemens had recently purchased a building in Soulard, so he and his friends grabbed instruments and flashy costumes and began to throw a large party up and down the street.

Today, there is no disputing that Soulard is the hub of Mardi Gras celebrations within the city. Nowadays, people flock to St. Louis’s two-month-long celebration that started on Jan. 6 and will end on March 4. Not surprisingly, Fat Tuesday itself is the pinnacle of the nearly two-month celebration.

Where should you go to celebrate Mardi Gras in St. Louis?

Close behind New Orleans in terms of large celebrations, St. Louis has plenty of opportunities to get out and have some fun throughout the entire week. Most notably, the Grand Parade will be this Saturday, March 1 at 11 a.m. Hosted in the Soulard neighborhood, the Grand Parade draws tens of thousands of St. Louisans. Make sure to line the route from Busch Stadium to the Anheuser-Busch Brewery in order to see elaborate floats and catch free beads and candy. Between the chance to party in the daylight and shamelessly collect free stuff, it’s every college student’s dream. 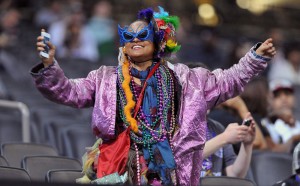 Gene Sweeney Jr. | Baltimore Sun | MCT
If you’re looking for a calmer, more sophisticated atmosphere, though, many Soulard restaurants such as the International Tap House and Molly’s will be offering drink and food specials in honor of the occasion.

Planning an expensive date in order to impress a special someone? Tickets for the Mayor’s Mardi Gras Ball on Friday night are currently going for $100-500 a pop and offer you the chance to mix with members of elite St. Louis society.

For a family-friendly atmosphere, check out Mardi Gras at the Zoo on Sunday.

And on Fat Tuesday itself, bid goodbye to the carnival season until next year with a second parade, this time at 6:30 on Washington Avenue in downtown St. Louis.