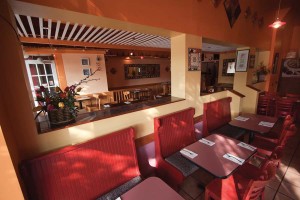 Thai Pizza Co. is one of four Thai eateries off the Delmar Loop. The restaurant features pizzas topped with Thai noodles (and mozzarella) as well as traditional Thai dishes.

Some culinary marriages were never meant to be. Imagine a pizza crust with a heavy layer of Pad Thai rather than tomato sauce and topped off with a layer of greasy mozzarella cheese. If this sounds appealing, your dreams may have come true; otherwise, you’re likely disgusted.

Located on the less-congested end of the Delmar Loop is Pi Pizzeria’s younger, less experienced Asian stepbrother. Thai Pizza Co. has a novel concept of food as quirky as its decor—a matrimony of pizza and stir-fry.

This particular visit yielded a mix-up with the order, which for an empty restaurant on a Tuesday night, is hard to excuse. However, the staff was highly apologetic and eager to please. They promptly produced the correct order.

Those courageous enough to order the unique pizza concoctions should be prepared to guzzle water. The absence of tomato sauce means nothing can dilute and contrast with the savory, greasy toppings. These pizzas consist of a salty mess atop a dry crust. Avoid the pad Thai pizza, which includes chunks of tofu that absorb loads of salt and soy sauce. Instead, order something like the mischievously named Drunken Pizza, which offers highly appreciated slices of tomato.

Diners can order either a thick- or thin-crust small personal pizza to share between two or three people for less than $10. Thai Pizza does not offer delivery services, and no outdoor seating is available. One must either order carryout or find a seat among a host of mismatched chairs and tables. I don’t claim to be an expert on Thai interior design, but I’m pretty sure that plastic ferns and Christmas lights do not evoke a sense of Thailand. Calling ahead to expedite orders is encouraged, but expect a busy dial tone or a thick accent on the other end.

Although the restaurant leaves much room for improvement, with a name like Thai Pizza Co. it is clear that the least appetizing item on the menu is here to stay. Those who love Asian and Italian foods equally should keep their passions separate. At Thai Pizza Co., order a peanut-sauce pasta, then have an affair with an East Loop pizza at Pi, just a short walk down the road.

Despite its creativity, Thai Pizza Co. is an example of how an Asian-Western fusion can go awry.