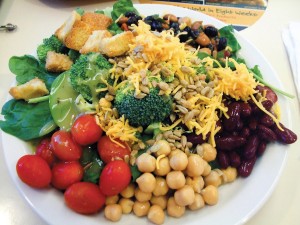 
Located in the St. Louis suburb of Creve Coeur, the restaurant Sweet Tomatoes, part a nationwide chain, offers a unique buffet experience when compared to other all-you-can-eat options.

The concept is quite simple: Pay $10 for unlimited salad, soup, pasta and bakery items, many of which are vegetarian friendly. Sweet Tomatoes distinguishes itself from the typical salad bar with its size. The double-sided island for salad is at least 30 feet long, featuring an array of house-tossed salads: Wonton Chicken Happiness, Azteca Taco Salad with turkey, Cherry Balsamic and Blue Tossed Salad, etc.

However, the real specialty of this buffet is the ability to create your own combinations. I constructed my salad with romaine lettuce, spinach, cherry tomatoes, chickpeas, cilantro, black beans, red beans, broccoli, sunflower seeds and carrots.

The choice of dressings is a bit disappointing, however, with six of the ten available being some cream-based concoction. I opted for the honey mustard dressing with flakes of cracked black pepper.

While not everything on the buffet line tempted me, the majority of it at least appeared to be clean and fresh. The lettuce was crisp, the tomatoes plump, the broccoli a dark green and the beans soft, but not mushy.

Upon reaching the end of the salad bar, one encounters the soup station. I opted for the chicken enchilada. It wasn’t overly greasy or cheesy like one might expect from a Tex-Mex-inspired soup; rather, it was bland and noticeably lacking in seasoning. Hints of cumin and chipotle were present but only perfected with a dash of table salt. What the soup lacked in flavor it made up for in substance, with plenty of chunks of white meat chicken.

The bakery follows the soup and features small muffins, bread and three varieties of focaccia. The focaccia was too fluffy and didn’t have a good thick crust, like one would expect. There was also a pasta station with a cook whipping up what seemed to be a very popular macaroni and cheese.

To round out the meal, Sweet Tomatoes offers Edy’s frozen yogurt, gooey chocolate lava cake and tapioca pudding. The chocolate lava cake wasn’t too rich and was complemented by a swirl of yogurt, albeit somewhat soupy yogurt. There is also a wide variety of Republic of Tea hot tea bags available.

While the atmosphere is decidedly suburban and the dining room somewhat run-down, the food is surprisingly fresh, healthy and varied from the typical buffet or fast-casual restaurant. If you’ve been searching for an eatery that will please both the omnivores and herbivores in your crew, Sweet Tomatoes might be the place to go.