Ten minutes after the hour, Student Union President and junior Kenneth Sng appears at the Student Life office, mug in hand and thin-framed, but large glasses resting on his nose. He strides over and firmly shakes my hand, and then immediately begins to look inquisitively at some of the office landmarks. I walk him back to our conference room and gesture towards his seat.

Before I can ask a question, he spills a small puddle from his mug, containing what looks like water, on the table and rushes to mop it up with napkins. He laughs about this, as if it were the punch line of a joke, and makes a comment about how he often sees Student Life writers in the office late at night while walking home from SU. 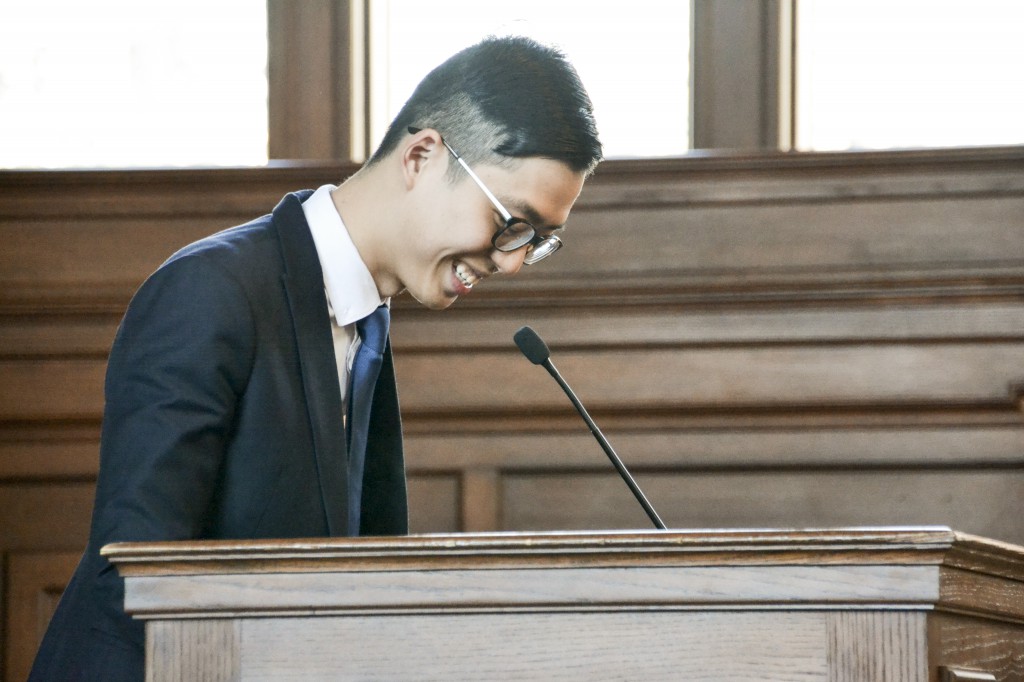 Junior Kenneth Sng speaks at the 50th Student Union inauguration held in Holmes Lounge in March. Sng will serve as the new Student Union president for the next year.

Sng is from Singapore—in Southeast Asia—which he emphasizes in a way that makes me think he gets asked this very frequently. When I ask him if he’s experienced culture shock from moving to the United States in early adulthood, he says that Hollywood movies helped brace him for the realities of Western culture.

He launches into a story about one of his first experiences at Washington University. It was a muggy summer day during the international student orientation, and Sng got lost trying to find Brookings Quadrangle. He found an alum who hadn’t been on campus for 50 years, but nonetheless insisted on helping Sng find his way.

“He was sweating walking me from place to place, trying to find the actual location,” he says. “I felt so bad—he was so friendly—and that took me by surprise. In Singapore, people are like, ‘This is the way. This is where you go—this direction, that direction.’”

I ask him if he’s found any negatives, and after thinking for a minute, he fails to come up with any ideas. He begins to vocalize this feeling when the answer hits him: “Oh, except the food,” he says. “American-Asian food is very different from Asian-Asian food. So that was something that always makes me wish I was back home.”

He quickly bounces back from this melancholy thought, and begins to talk about what makes students in the United States different from students in Singapore and even the United Kingdom— where he also considered attending college.

“You talk to any student here, every student has a strong sense of purpose. I think that’s really nice. Because if you’re not idealistic when you’re young, when is the time to be idealistic?” he says.

But Sng realizes that all attributes of college students in America—including himself—have both a beneficial and a detrimental side. This dedication toward excellence, he argues, often creates an unachievable standard that students feel compelled to live up to.

“I think it can be a bit excessive at times with unrealistic expectations of students,” he says. “And students feel as though they have to meet up to those expectations, and you can’t really complain about it.”

These compulsions, he says, are magnified by the fact that Washington University students live in an area with a diversity of safe and unsafe surrounding neighborhoods, something that never occurs in Singapore. He tells me about how Singapore is about a 1 1/2-hour-drive-wide and that populations are fairly homogenous, in terms of socioeconomic status and safety. The way he talks about Singapore makes it seem like Singapore embodies the American Dream of equal opportunity and elevation to success more than America itself does.

Yet, Sng was of strong mind that an international college, instead of a college in Singapore, was the best option for him. He longed for the liberal arts curriculum that American universities like Wash. U. offer, especially after the strictly structured and extremely restricted classes of high school.

In Singapore, there is a compulsory year and 10-month military service after high school. Some less physically developed post-graduates, he tells me, are enlisted two months early in order to prepare for the physical toll that military life requires. Sng was one of these lucky few.

Twenty days after his 18th birthday—around a week after his high school graduation—he was enlisted in the Singapore army. After a four-month basic military training schooling and a nine-month officer cadet school, which trained him on “military tactics and military law and just being out there in the jungle and how to survive in the jungle,” Sng became a platoon commander for the remaining 11 months of his enlistment for an armor battalion, leading a group of 35 people in communicating between armored vehicles.

“I was actually the youngest person,” he says. “Imagine being in charge of 35 people, making their daily training schedule, make sure that they wake up on time, they get fed, make sure that they go to training, make sure that they’re on task when it comes to exercises, taking them on overseas missions—they’re not active missions, so we don’t fight wars—but it’s simulated missions, the way you practice what it would be like if we were at war.”

“I think that just in the army in general, that was the first time when I felt truly independent and detached from my family,” he says. “That in of itself was a huge growing experience because that’s just a stage of life—a rite of passage—that everyone has to go through.”

The second most important thing he learned, taken much from the teachings of the commander who trained him, is the importance of both the individual and the organization in any initiative put forth.

“I think a lot of times when we get hung up on doing a certain thing, we think that one thing, that one achievement, that one legacy, is the most important thing, and it has to happen,” he says.

He gives the example of the SU Budget Allocation Manual that he was paramount in making public. Though he anticipates the protocol to be around for a few years, those tangible outcomes aren’t the most important products of the project.

“So, fun fact,” Sng says, “It had been two years since I had taken my English exams. It’s a bit of a struggle, so I was placed into this pre-writing course, as [are] many international students. I struggled with picking up writing again…and I decided, if this is something I’m going to struggle in, I’m going to minor in it, so I can tell people that I did something I’m not naturally inclined toward.”

This mixture of perseverance and change in the face of difficulty depicts a larger characteristic of Sng’s that runs through many facets of his life. In fact, the first reason that he ran for Student Union was because he tried to start a Singapore Students’ Association and thought that the financial allocation process wasn’t transparent or streamlined enough.

“We spend a lot of time focusing on the means, but we sort of lose that clarity of purpose. Why are we doing this? What is this for?” the now-president says of the current state of Student Union. “The biggest purpose for SU’s existence on campus is to empower undergraduates to be a force for change and improvement. That’s actually a bit cliche, but it’s also actually in the mission.”

As soon as I bring up Student Union, his face lights up, and his hands begin to fiddle with his mug again. He leans back and forth in his chair to emphasize his points and speaks rapidly, as if afraid that he won’t have the time to cover all he wants to say about Student Union.

“I joke about this with the other officers—it’s a total transformation of SU,” he says. “It’s going to be ambitious, but I think we can do it.”

We spend approximately 10 minutes discussing the vital role that he sees SU having in advocacy projects on campus. He mentions mental health, furthering It’s On Us outreach, community service and socioeconomic diversity. These projects, he hopes, will restore students’ faith that SU is capable of advocating, especially with larger projects on campus.

In light of his passion for advocacy, I next ask what he thinks the biggest problems are on campus and whether SU has the power to change them or not. He points to a gap in understanding among people of different backgrounds and beliefs.

“Argumentation is not about forcing you to believe that what I’m saying is the truth with a capital ‘T,’ the one and only truth,” he says, drawing from a saying one of his writing professors often repeated during class. “I think it’s about bringing the other person closer to my perspective and [seeing] where I’m coming from. Even if you don’t, you’d be able to see why I’m arguing for the things I’m arguing for and be able to respect that we might not agree, but we can understand where the other’s coming from.”

Despite his passion for creating change in the student body, Sng’s genuine kindness and humility come across in every word he says and every action he takes, which come from his fundamental world view of believing the best in each individual. He doesn’t back away from his failures, and he doesn’t expect others to either.

This fact becomes increasingly apparent as he describes in detail to me how he recently got his driver’s license after two attempts in Singapore and four in the United States, spanning across five years of practice and classes.

“People are going to think the SU president can’t drive,” he laughs. “But at least I don’t have that hanging over my head!”

Sng is on a scholarship sponsored by the Singapore government throughout college, and in return, he has agreed to work for its government for up to six years after graduation. This environment, he appraises, seems to fit with a lot of his studies and organizations he’s involved with.

“Even when it comes to the things I do on campus, it’s the things you find the right meaning out of and a sense of purpose out of that you would want to continue,” he says. “And if I have that sense of purpose and meaning in a career in civil service, I’ll definitely continue for as long as I can.”

Near the end of our interview, I ask Sng what he wants his legacy to be at Wash. U. He takes his time pondering the question.

“I think I want people to feel that, on a personal level, something has improved at Wash. U. in my time—things that people can tangibly say, ‘My life is so much better now,’” he says. “I don’t think it has to be, ‘Because of Kenneth, this happened,’ but I think that if people think the past year was a better year for [them] in general because of these initiatives by SU—that would be amazing.”

After thinking about his answer for a moment, he says, “Not as sexy as I thought it would be. It’s one of those things that seems really simple on the ground level, but you have to move an entire organization to get it done. The beauty is in the simplicity of those ideas.”