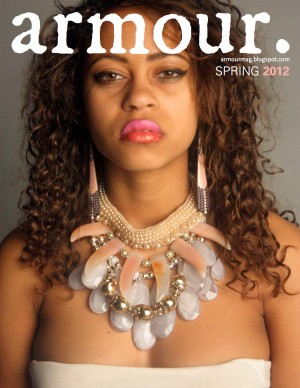 This is the first thing you will see upon visiting the blog of the newest publication to hit campus, Armour Magazine. Headed by rising seniors Jacob Lenard, Felicia Podberesky and Chantal Strasburger, what started as an online blog has already attracted an impressive number of fans and followers. It all began when the collaborative team of three noticed a lack of appreciation for fashion and sartorial expression on campus.

The project’s title was inspired by the idea that clothing, like armor, can give someone confidence and strength in the face of life’s daily struggles. The group’s concept alludes to a quote by renowned New York fashion photographer Bill Cunningham: “Fashion is the armor to survive everyday life.” When asked about the significance of the unique spelling of Armour, Strasburger laughed. “I always thought it was spelled like that because my mother is British, but we like [the spelling]; it gives it something extra.”

The basic purpose of the magazine is to inspire others by documenting the street style of everyday students and faculty on campus. The format will specifically appeal to those familiar with blogs such as lookbook.nu and streetpeeper.com, which are dedicated to displaying impromptu fashion photography.

Since Armour is still in its early stages, Lenard is currently the only official photographer, and his selection of fashion subjects is often isolated to the campus community.

“If I see someone across the quad with a distinct style, or coming out of Olin Library, I ask them if they mind that I take a picture of them,” he said. “The selection process is not meant to put anyone down, only highlight individuality.”

The team seeks to convince others to put in that extra effort, even if it’s only adding 10 more minutes to his or her morning routine, in order to look and feel good.

“We’re not saying, ‘dress like this,’” Podberesky emphasized. “We’re saying ‘portray and own your style, whatever it is.””

The creators even hesitate to use the word “fashion” to describe their magazine due to its negative connotations. They feel describing someone as “fashionable” implies that one way of dressing is accepted over another. What sets Armour apart from other popular fashion advice blogs and magazines is this down-to-earth and accepting attitude of its founders.

As current undergraduate students themselves, the Armour team recognizes what is feasible in terms of cost, understanding that not everyone can afford to buy brand names, and writes with real student budgets and interests in mind. It is not a magazine preaching haute couture on the fashion runways, or educating the student body on unrelatable DIY projects. Rather, Armour seeks to celebrate the existing style and creativity at Wash. U.

Expect to see your coworkers, fellow classmates, and close friends at Wash. U. featured in the magazine and online. As of Wednesday, over 60 people had been photographed for the blog alone.

“It’s great to meet new people [when photographing them] and connecting with them on a personal level,” Lenard explained. “I still wave to people I’ve photographed.”

This blog-turned-magazine is gaining popularity as it continues to feature familiar faces on campus in a positive light. According to the creators, to feel “armoured” has already become a term to describe feeling confident in one’s appearance.

Also featured in Armour is a section dedicated to interior design, recognizing compellingly styled student living. The group continues to develop new ideas for its magazine, hoping to expand to topics such as makeup, men’s clothing and vintage apparel.

Although the Armour team currently consists of design majors, the members welcome students from all backgrounds and encourage those outside of the Sam Fox School to become involved in the magazine. They have high ambitions for the coming school year, including assembling a larger team and acquiring additional funding in order to distribute more hard copies of the glossy full-color magazine, which will be published twice a semester. The first issue, featuring sophomore Imani McKenzie on the front cover, will be distributed at Armour’s official launch party Thursday, April 12 in The Gargoyle from 5:00 p.m. to 6:30 p.m. There are only 100 limited-edition copies; but a digital version will also be available online at http://armourmag.blogspot.com. For more information on Armour magazine, email