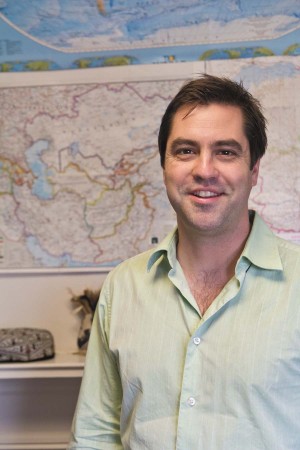 Michael Frachetti, associate professor of anthropology, in his office.

For much of the summer, a beat-up Russian bus sits amongst the foothills of eastern Kazakhstan, within the Dzhungar Mountains. This solitary bus, outfitted with state-of-the-art scientific and electronic equipment, wireless Internet, and a driver’s area that transforms into a makeshift sleeping cabin, is a recent supplement to the equipment that has fostered years of groundbreaking fieldwork and research on nomadic pastoralism and human history.

“Since we’re out there with a lot of technical equipment … I got sick and tired of trying to chase down companies like Northface to get me some sort of ‘techno-yurt’ that would actually stand up to the weather,” Frachetti, associate professor of archaeology, said. “We found a bus that was perfect. It was two or three years old, and my mechanic was like, ‘For $110,000, we can gut the bus, rebuild everything, strip it down completely and turn it into what is effectively a science transformer.’

Frachetti primarily studies Bronze Age pastoral societies of central Asia. His primary research site, a settlement called Begash, dates back to as early as 2500 BC.

“He is one of the brightest minds of his generation. I think the thing that he particularly brings is a really novel view of the way human societies interact, both in the past and, to some extent, in the present,” Tristam R. Kidder, chair of the anthropology department, said. “Because of his work at the crossroads of world civilizations in inner Asia and central Asia, Michael is able to connect ideas across really large space and across very large amounts of time, so really in some ways, he’s doing work that almost no one in the world is actually doing right now.”

Frachetti’s work at Begash has influenced the both the archaeological community as well as his own outlook on Eurasian nomads and the development of societies in the area, shifting the view away from a conventional understanding of these nomads as highly mobile herders with little agricultural involvement.

“For a long time, I argued on the basis of the existing evidence that domestic crops were a very, very late introduction to the northern part of Eurasia … thousands of years later than in Mesopotamia,” Frachetti said. “About two years ago, some of the samples that we had taken from the site that I was excavating in Kazakhstan got analyzed here by one of my graduate students, and he comes into my office and is like, ‘We’ve got domesticated grains.’

“That, for me, is the best part of science: the opportunity to make discoveries and to make breakthroughs. …Each year holds some incredible discoveries, and then all the sudden chronologies are changed and economic reconstructions change, and it becomes a really exciting field.”

Frachetti is currently analyzing power and leadership structures that are disassociated with boundaries, as well as working on a site in Uzbekistan and a new project in Indonesia on climate change and social adaptations to environmental change and post-tsunami environments.

“Right now, I’m really interested in the way geographic boundaries are being transcended by institutional boundaries that, in fact, are formed by dynamic networks, and then how that affects personal decisions and individual decisions and group decisions,” Frachetti said.

While studying at the State University of New York at Buffalo in the mid-1990s, Frachetti spent time abroad in the former Soviet Union, which was still recuperating from the country’s dissolution in 1991. It was there that he really developed an interest in central Asia.

“All of the sudden, the Soviet Union was open, and it was a whole new frontier. At that time I wasn’t interested in archaeology; I was just interested in the region in general. I had always been interested in Asia just broadly, and when that opened up, people had started saying, ‘You should do some work on central Asia,’” Frachetti said. “As I started to get into archaeology, also around that same time, the two ideas just kind of came together, and I was just in the right place at the right time.”

“[Soviet archaeologists] had some constraints, but they collected an incredible amount of data. They were encyclopedic about it. They created these huge volumes on archaeology that we could never have done,” Frachetti said. “They provide an incredible backdrop and underpinning to a lot of what we’re doing. The problem is that they had some restrictions as to the kinds of ideas they could explore, and so they stuck with some pretty canonical ideas.”

Frachetti explained that both sensitivity and understanding are necessary while working with the native Kazakh archaeologists in relation to groundbreaking ideas and discoveries.

“It would be like someone coming here and saying, ‘In fact, there’s some new evidence to suggest that Abraham Lincoln was a racist.’ That’s the kind of paradigm-rattling that we’re doing,” he said.

In the past few years, Frachetti has developed a full-fledged summer program for Wash. U. undergraduates, although last summer was the first time he brought students to Kazakhstan for purposes other than for a college course. This summer, Frachetti is bringing nine undergraduates as well as seven or eight graduate students and faculty members from Washington University and around the world.

For Frachetti, however, his program is far more than archaeological fieldwork and the chance to participate in paradigm-shifting discoveries. Rather, it is a way of coming to more fully understand human experience and a completely alien culture.

Frachetti recalls a number of meaningful encounters he has had with local nomads throughout his time in Kazakhstan.

“When we’re working out in these wilderness areas, there are people who live there, and this is their history … it’s important to make sure that you keep in mind that research comes at the cost of local populations in many cases,” he said. “This past year, I had picked a place to build our camp. There was no one around, so I didn’t check with anybody; we arrived in this open field, and we started putting up our tents, and out of nowhere this nomad rolls up on a horse and is like, ‘What are you doing?’

“We ended up putting our camp in kind of a scrubby, not so soft and lush area because the locals didn’t want us to put the camp on their grass, and you’ve got to respect that.”