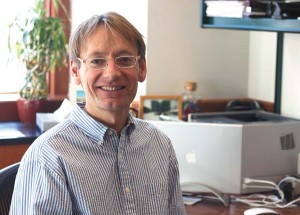 Have you ever wondered what the study of aging, technical writing, biking, patting students, vegetarianism, a labradoodle, lawn games and baking have to do with each other? The interests of Dr. Brian Carpenter, associate professor of psychology, form an intersection of all these things. If you have ever had Dr. Carpenter for Introduction to Psychology and seen him running around the classroom and balcony or patting students’ heads while talking about the importance of proximity in social psychology, then you know he has a warm and extremely personable demeanor. But that is just the tip of a very large iceberg that is the life of Dr. Carpenter.

When most think of New York, their minds tend to run directly to New York City, unless they are like Dr. Carpenter, who was born in Louisville, N.Y., in 1964. Never heard of it? That’s probably because it’s only thirty minutes from Canada—compared to New York, N.Y., which is seven hours from Canada—and, according to Carpenter, “The cows to people ratio was fifty to one.” Not the typical image of New York. But Dr. Carpenter seemed completely fine with that. Not even visiting New York City until he was 18, Carpenter and his family “tended to go to Montreal, Canada, to see Major League Baseball games.”

In high school, Carpenter was on the tennis team and the swim team. He was even a diver one year which didn’t work out as well as planned. “The senior year the diver quit so to get at least one point, I volunteered to dive, but I had no idea what I was doing,” Carpenter explained.

So, how did this boy who went to Canada to watch baseball end up as one of Washington University in St. Louis’ psychology professors? Surprisingly, the story begins when Dr. Carpenter was a technical writer.

He graduated from Williams College in Berkshire County, Mass. Carpenter loved attending a small college since, in his words, “You knew everybody on campus. It was like being a part of a big family.”

Carpenter then took a job as technical writer in Boston where he visited people and sold and taught them to use software at factories owned by Dannon, Kraft Foods and Dole. While in Boston, he joined a running club and participated in several Boston Marathons and road races for five years.

“The best part of that job was that they sent me down to Australia,” Carpenter remembers. With one suitcase and a furnished apartment, he spent an entire year in Melbourne, Australia. He went scuba diving in the Great Barrier Reef, worked only from 9 a.m. to 5 p.m. on weekdays because the office was locked at any other time, and enjoyed traveling much of Australia. Carpenter enjoyed the experience so much he told me he believes “working abroad should be mandatory.” The only complaint he had was that it was hard to find peanut butter.

Carpenter continued to travel the world. He went on a boat trip through the Amazon, which he enjoyed, but says, “I would never want to go back again. It felt like walking into a National Geographic article: The bugs were big and scary with fangs and teeth.”

A bike trip through Italy and France, armed only with a map to the next hotel and meal, is another favored memory. Carpenter pedaled to the next hotel on his map, dined and woke up the next day to continue biking. Meals tended to challenge his vegetarianism. “Some of the places didn’t understand what to do with a vegetarian, and I would get blocks of just cheese,” he said. Carpenter added that these trips “remind me that we spend too much time inside.”

Throughout his experiences, he found that the most rewarding part was teaching others. Soon, Carpenter found himself at Case Western University in Cleveland, Ohio. His first diagnosis: “People were so nice; at first I thought they were crazy.”

He completed a doctorate in clinical psychology at Case Western University and departed for New Orleans. There he worked in a Veterans Affairs hospital, where he helped patients with posttraumatic stress disorder (PTSD), strokes, heart attacks and brain damage. That is also where he decided he “always liked older adults better than kids.” But don’t worry, fellow students. He likes you, too, just not as much. He is a professor of gerontology, the study of aging, after all.

I asked him how he could deal with such a depressing atmosphere, and Carpenter responded: “It’s not really depressing; it’s sad but not depressing.” He said that he made it his job to “make the end of [patients’] lives the best they could be.”

After that tremendous journey, Carpenter began post-doctoral work at the University of Pennsylvania, though he has lived in St. Louis to teach at Washington University for the past twelve years. He has taught Introduction to Psychology; Social Gerontology; and Living, Dying, and Death. Although he has a natural enthusiasm for the material, Carpenter’s antics come from the belief that “[students] just sit there, typing away, and I’ve got to give you a reason to.” He would also like to note: “Gerontology isn’t as depressing as it sounds!”

Carpenter also has a clinical practice where he helps older adults suffering from dementia and their families communicate. “I really like language and listening to how people talk to each other,” he said. In addition to a clinical practice, Carpenter has a research laboratory that primarily focuses on Alzheimer’s. If you ever work in his lab, make sure you like dessert, because Carpenter has a tendency to bake cakes and a variety of different sweets on his lab members’ birthdays.

If you don’t see Carpenter in his lab or in class, you may spy him in Eliot House where he has been a faculty associate for two years. He says he is having a great time living on the 40. Carpenter has a table that seats fourteen people that he loves using when he invites Eliot residents to come and eat a home cooked meal. Or, if you join the Eliot Lawn Games Society you may get to play croquet, badminton or boule with him.

As Carpenter is an extremely active man, you might find him working out in the South 40 Fitness Center or walking his puppy, Ollie, who will turn two in April. “Don’t throw away your chicken bones on the 40! We don’t want Ollie to eat them!” he stressed. As a previous college varsity squash player, you may spot him in the squash rooms of the Athletic Complex or playing tennis. You may even catch him biking next to the Mississippi River.

Personality quirks round out his character. “I am fascinated by dreams and no one really cares, but I love telling them,” he says. Be sure to stop by the South 40, pet Ollie, and listen to some dreams over a piece of homemade cake.