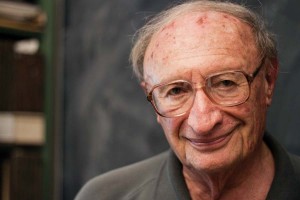 Dr. Guido Weiss, the Elinor Anheuser Professor of Mathematics, in his office. Weiss is the oldest serving professor at the University.

When you hear the word guido, the first things that probably come to mind are gym, tan, laundry, grenades and Snooki. However, when it comes to Washington University, guido should hold an entirely different meaning. Guido Weiss, the oldest serving professor at Washington University and former chair of the math department, is much more than a meathead in a tank top. Perhaps the only things he has in common with the Jersey Shore cast are his Italian origins and his knack for being fit, even at 83 years old.

“You may wonder why I was not in the U.S. Open,” Weiss said, smirking. “I actually did something very foolish, I hurt my left leg on a backhand and played for five days when I shouldn’t have, I had torn the biggest muscle in my leg and the tendon and I’m still healing. So I’m out of tennis now, but I’ll be back in shape for the Australian open.”

Weiss’ office is cluttered with stacked papers and books, and family pictures hang from every wall. Proudly pointing to the trophies in the corner of the room, Weiss explained that he is a three-time champion of the Herman Open, a lesser-known tennis tournament here in St. Louis. However, before Weiss’s athletic career blossomed, he was an Italian boy living in Europe during the pre-World War II turmoil. 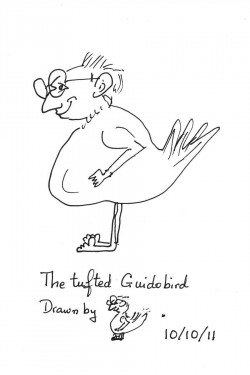 Guido Weiss draws a tufted Guidobird, which bears a striking resemblance to him.

“In 1938 Mussolini enacted some anti-Semitic laws when he was aligned with Hitler,” Weiss explained. “My father was a rather well known psychoanalyst. He formed the Psychoanalytic Society, and he was a well known student of Freud and essentially all of these things were pretty much ruled against by the powers that be and many people fled Italy.”

His father was invited to the Menninger Clinic, a prominent psychiatric clinic in Topeka, Kan. Weiss, his father, mother and older brother fled from Italy to the United States in 1939. Although Weiss eventually became “a Topeka boy,” he had previously served in the youth army, the Balilla, where he was in the same platoon as Mussolini’s son.

After a few years in Kansas, Weiss moved to Chicago where his father joined the Chicago Psychoanalytic Society. In Chicago, he started high school, and his athletic career continued to thrive.

“I was a pretty good athlete,” Weiss said modestly. “You name it, I played it. I was an All-City football player in Chicago. I played basketball, ran track, played baseball. I was also a canoe racer and a pretty fast runner, about second best in Chicago. I had football scholarships offered from Purdue, Northwestern and a couple other places.”

Although sports dominated his life throughout his high school years, Weiss knew he wanted to have a career in academics. He was accepted to the University of Chicago; its enrollment at the time consisted mostly of veteran students thanks to the GI Bill. Before rejecting his sports scholarships and committing to Chicago, Weiss trained with Otto Graham, member of both the College and Pro Football Halls of Fame.

“Otto came back from the war and for that summer he ran a camp at Northwestern for people who were going to be on the team,” Weiss recalled. “He called me and asked me if I would change my mind. And I did spend quite a bit of time with him, caught more passes from Graham than almost anybody, and I do remember that I enjoyed it. But the last week he asked me whether I changed my mind, and I said ‘Not really, Chicago is such a fantastically good school, I really want to go.’”

Graham assured Weiss that he was making the right decision, as he was probably too small at 185 pounds to have a career in the professional leagues. Weiss attended the University of Chicago for all four years, where he continued to play basketball and baseball and participate in track while also pursuing various studies and working with world-renowned individuals.

“Among many things, University of Chicago had a very good math department,” Weiss said. “But I studied many things. I started off in both chemistry and physics. I worked with [Enrico] Fermi. He is the father of the atom bomb, a Nobel Prize-winning, very famous physicist also from Italy. I probably would have become a physicist and worked with him, but he died of cancer.”

Although Weiss worked closely with Fermi, it was not Fermi’s influence that led him to a career in mathematics. Rather, a dog and an unexpected turn of events resulted in Weiss’s lifelong commitment to math.

“Actually, I used to be a canoe guide in the aquatico-Superior regions in Minnesota if you know where that is,” Weiss said. “You could probably drop me in a large, very wild region there and I could probably tell you within a few minutes where I am.

“I used to take parties there and one late August I took a party out, and I had a bad case of mononucleosis and then a dog bit me. I didn’t have an ounce of fat in me at the time and I took rabies shots in the stomach, which was all muscle, so I was bedridden when I got back to Chicago. My fiancee, who became my wife, was taking some math courses and it was agreed that I could take some courses and she would report back to me. I had to stay home most of the time and I found reading these math books very interesting, so I very much got interested in it.”

“But I was interested in many other things too,” Weiss added, as if it wasn’t already clear that his activities were not limited solely to mathematics.

He finished school and married his first wife, Mary, whom he refers to as “one of the best mathematicians in the U.S,” then the two of them searched for a place where they could both find jobs. After briefly working at DePaul University, Weiss and Mary were offered teaching positions at Wash. U., where Weiss has remained ever since, aside from a few sabbaticals.

In keeping with his diverse interests, Weiss is fluent in Italian, Spanish, French, German, English and a little Mandarin. Out of his home he teaches an Italian literature class to a group of 12 adults, including a former interim dean of the engineering school. Throughout his educational career, Weiss has also had the opportunity to broaden his teaching environment beyond the American classroom.

“I have taught almost everywhere in the world,” Weiss said. “You name it. I have an Italian mafia, a Chinese mafia of Ph.D. students, a Spanish mafia, even an American mafia. I now am having my 42nd Ph.D. student throughout the world.”

Weiss’ first wife died in the early ’60s and he married his current wife, Barbara, a molecular biologist and ceramicist, in 1964. They have two sons. One owns the Big Shark Bicycle Company here in St. Louis, while the other runs an athletic and training center in Manhattan. Both have inherited their father’s love of sports.

In addition to teaching as a professor, Weiss is responsible for revamping the athletics department of Wash. U. in the 1970s, a sign that athletics follow him wherever he travels. Throughout his life, Weiss has also written over 150 publications on his specialty, harmonic analysis and wavelets, received honorary degrees in multiple foreign countries and worked with thousands of undergraduate and graduate students.

Atop his file cabinets in the corner of the office sits a small blue and white ceramic jar labeled “Ashes of Problem Students.” No worries, there are no real ashes in the jar. Weiss, an athlete and academic with a love for jokes, said he creates interminable bonds with many of his students, even the problematic ones.

Once a scholar graduates, they do not cease to be a student of Professor Weiss, as his fondness for teaching both undergraduates and graduates extends beyond the classroom. When asked if he continues to communicate with previous students, Weiss said affectionately, “Oh yes, I still stay in close contact with my whole caboodle.”