A new beginning with Shawarma King on the Delmar Loop

The end of Melville Avenue intersecting Delmar Boulevard has been a spot of much recent restaurant turnover—in the last year, Zippy Burger, Moya Grill and 8 Dollar Deli have all come and gone. Still, that hasn’t deterred Muhammad Alsalem, the owner the latest restaurant to occupy the space, Shawarma King. The restaurant, which serves Middle Eastern fare, opened up this past December. Alsalem has worked on the Delmar Loop and in the restaurant business for over eight years and brings his combined industry knowledge to the new concept, hoping to stem the tide of quick closings.

“People look for two things,” Alsalem said. “Quality and price. If you’re serving good quality food, and you have a reasonable price, I don’t see why people wouldn’t come to your restaurant.” 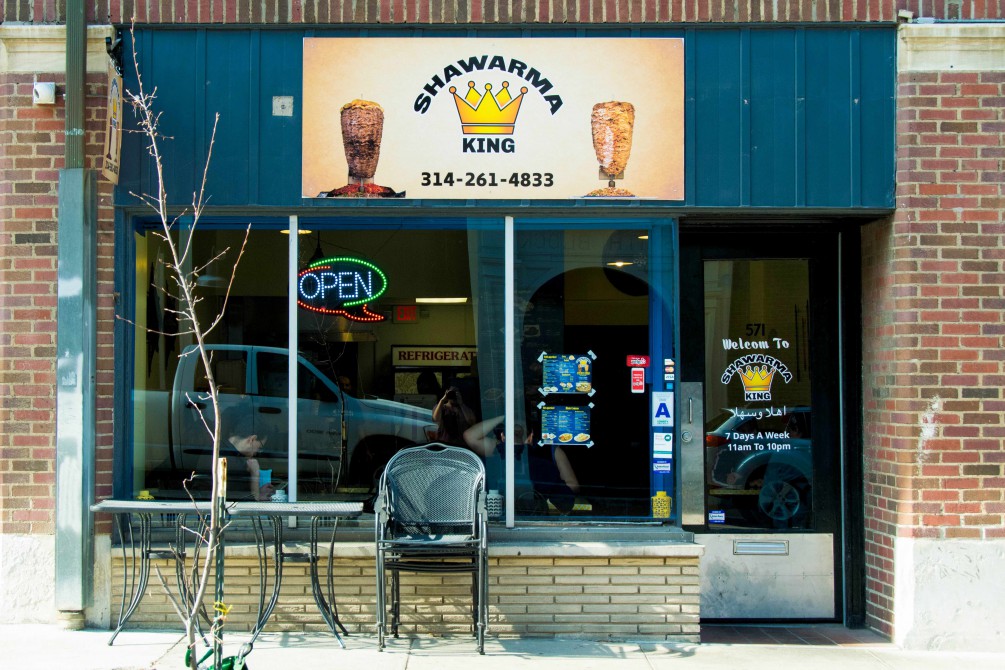 Shawarma King, which opened in December on the Delmar Loop, sits at 571 Melville Avenue. The restaurant serves Middle Eastern dishes including hummus, falafel, shawarma and baba ganoush, with main courses ranging from $7 to $11 dollars.

In terms of quality, Alsalem has taken steps to make his store transparent and approachable. The classic Middle Eastern rotisserie-style meat, called shawarma, is prepared fresh every night with house spices. During the day, the meat is visibly displayed right behind the counter and liberally shaved off when a customer orders.

“We make everything from scratch,” Alsalem said. “We don’t buy anything from anyone else. Everything is being made in this place, from hummus, falafel, shawarma and baba ganoush.”

Shawarma King offers a number of hot and cold appetizers, as well as main courses with shawarma and vegetable options ranging from $7 to $11 dollars and cheaper lunch options for certain entrees. The meats, straight off the spit, are never dry, and the falafel is crispy and seasoned, along with the flavorful hummus and baba ganoush.

They also have shawarma and falafel sandwiches, which, to Alsalem’s excitement, can now be accompanied by shredded cheddar cheese (a little unorthodox, but Alsalem said he’s only received positive reviews).

With thoughts toward the future, Alsalem said he has plans for future expansions of the menu and restaurant atmosphere, as spring and summer approach. Though not divulging everything (“I want to make sure I get it right,” he said), Alsalem does plan to offer juices in the summer to complement available outdoor seating.

“We’ll have at least six or seven juices,” he said, including orange, carrot and lemon and mint flavors. “It’s going to be visible for people. It’s not like we’re going to have it in the back. We’re going to make it right here on the counter.”

Takeout-friendly shawarma places like Alsalem’s often fill city roles as cheap and quality late-night options. To support this clientele, Shawarma King will be extending its daily hours from 11 a.m. to 11 p.m. starting in March. Additionally, they’d like to offer delivery for just a few dollars through the restaurant rather than through a third-party company.

“I want to do the delivery and make sure the customer gets the food fresh,” Alsalem said. “We’re going to be doing about three miles radius. It will take [a] maximum [of] 20 minutes.”

Alsalem suggested that the trolley construction on the Loop hindered businesses on Delmar Blvd. and Melville Ave., and he’s optimistic about the extra business he can attract once the trolley gets running. Anyway, students and other purveyors of the Loop can enjoy Shawarma King as a cheap, hearty and high-quality meal.